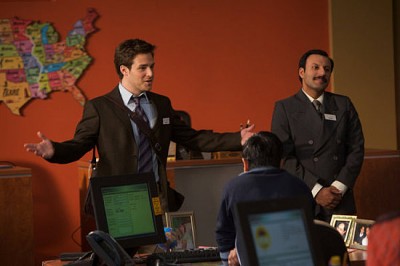 The little sitcom that caused a lot of controversy last summer has quietly ended its run. NBC has cancelled Outsourced after one season on the air.

The NBC sitcom started out decently and it looked like NBC might have a keeper on its hands. Last September, Outsourced debuted to a 3.6 rating in the 18-49 demographic and 7.49 million viewers. In week two, the demo number fell 22% to a 2.8 rating and 5.85 million viewers but that was still pretty healthy by NBC standards.

Unfortunately, over the course of the season, the ratings just kept dwindling downward. The ratings have gone as low as a 1.4 in the demo with just 2.97 million viewers. Those are horrible numbers for a major network, even NBC.

Outsourced’s season currently averages a 2.1 demo rating and 4.55 million viewers. For NBC, that’s not too bad but the average is only that high because of the early season ratings.

It’s certainly not a shocker than NBC has cancelled Outsourced after just one season. The 22nd and final episode, titled “Rajiv Ties the Bharat, part two,” aired last night.

What do you think? Are you disappointed that there won’t be a second season of Outsourced? Why do you think the TV show didn’t catch on?

great show! loved it! do bring it back. It totally deserves!

I thought the show was hilarious. I just happened to stumble upon it on Hulu and binge watched in a few days and also got my husband watching. I thought Brooklyn Nine Nine was funny, this show definitely took the laugh ratings to the sky with me. After watching the season finale I couldn’t wait for the 2nd season. PLEASE PLEASE PLEASE bring it back…

Outsourced is awesome, makes me laugh so hard and I have not seen a single negative review. Please bring it back.

This is the first tv series , which i used to watch by managing time
This is the best series i had being enjoyed a lot.
In this my fav. Characters were todd,manmeet n asha.
I was surprised when i get to know that the season 2 has got cancelled.

It is a great show with actual sense of humor. I accidentally watched one episode and couldn’t stop afterward. I have no idea why this went down on ratings and I wish I got it earlier and hope

amazing show there must be another season. i love it

Bring the season 2. It was a nice show.

96% of 9,620 people believe the show should have never been cancelled… So I can’t help but wonder if it wasn’t the show so much as the network? IJS..

There were more laughs in this first season than all of Fox’s “Dads” put together, and no stupid laugh tracks.. Oh, maybe that’s the problem… the sheeple need to be shown when and where to laugh in order for them to enjoy REAL humor…

This was the funniest series ever. Love it. Please bring it back.

This is so weird… I have not heard a single negative comment about this series and still season 2 was cancelled. maybe other series were scared of the their ratings so they made the channel drop it, as it would have been a disaster to loose from a low budget series but an amazing concept and cast. People love it. I wish some other Channel starts with Season 2

U loved this show

can’t we outsource the NBC ?

this is so disappointing outsource was one of my favorite series why stop season 2, this is so unfair. reality

outsourced was a wonderful serial and deserves another go. it was fun and laughter for an entire 30 minutes.hoping it comes back