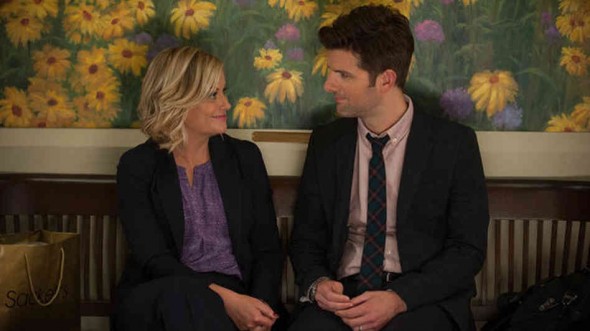 NBC has announced that the final season of Parks and Recreation will kick off on Tuesday, January 13th, at 8pm. The network will air back-to-back episodes each week with the series finale set for February 24th.

‘PARKS AND RECREATION’ TO BEGIN LANDMARK FAREWELL SEASON ON TUESDAY, JAN. 13 AT 8 P.M.

Celebrating With a Seven-Week Comedy Event, NBC’s Beloved Series Will Say Farewell With Back-to-Back Episodes Each Week Leading to an Emotional Hourlong Series Finale on Tuesday, Feb. 24 Following “The Voice”

UNIVERSAL CITY, Calif. — Dec. 1, 2014 — In the first TV event of the new year, NBC is giving its landmark comedy “Parks and Recreation” a sendoff that will maximize the show’s cultural impact. The seventh and final season of this critically-acclaimed and beloved series will begin Tuesday, Jan. 13 with back-to-back episodes (8-9 p.m. ET/PT) and continue with back-to-back episodes each week until the hourlong series finale on Tuesday, Feb. 24 following “The Voice.”

The return of the series, in fact, will be scheduled to premiere in the afterglow of the Jan. 11 “72nd Annual Golden Globe Awards,” co-hosted by Amy Poehler and Tina Fey.

“Mike Schur and Amy Poehler, along with their incredible producers, cast, and crew, have given us one of the great television comedies of all time, and we’re inordinately proud of ‘Parks and Recreation,’” said NBC Entertainment Chairman Robert Greenblatt. “In an effort to give it the send-off it deserves, we wanted to ‘eventize’ the final season to maximize the impact of these episodes, which really do take the show to a new level. The highly-anticipated one-hour finale will air behind ‘The Voice’ in order to lead the largest audience possible into what promises to be a very special hour of television.”

“Critics, viewers and all of us at NBC fell in love with this endearing, funny, heartfelt show and its authentic cast of characters,” added Jennifer Salke, President, NBC Entertainment. “After seven amazing seasons, saying goodbye to the folks of Pawnee will be bittersweet, so we want to give the show and its fans the most impactful final season possible.”

Starring Golden Globe winner Amy Poehler as a mid-level bureaucrat in the Parks and Recreation Department of Pawnee, Ind., “Parks and Recreation” has been Emmy Award nominated and is a winner of the Television Critics Assn. Award for best comedy, AFI Award, American Comedy Award and the highly prestigious Peabody Award.

Last season, “Parks and Recreation” averaged a 1.6 rating, 5 share in adults 18-49 and 3.8 million viewers overall in “live plus seven day” averages from Nielsen Media Research. “Parks” was the #3 most upscale primetime series on the Big 4 in its concentration of adults 18-49 living in homes with $100K+ incomes with a 161 index (100 represents an average concentration of those homes). “Parks” was also the youngest show on ABC, CBS or NBC last season, with a median age for its audience of 41.7.

What do you think? Will you be watching the final season of Parks and Recreation on NBC? Do you think it should be ending?

A casual look at actual ratings will tell you that it doesn’t owe its survival to audiences wanting to watch it.

This is a great show and I’m really sad to see it ending.

It’s always impressive how people will declare a show a flop or terrible just because they don’t like it. There’s a lot of tv shows I don’t like but it doesn’t mean they’re terrible, it just means they don’t appeal to my personal taste. But I’m not a narcissist so I can recognize that my taste is not the only one that matters.

I’m not saying it’s a flop because I don’t like it.

I say it’s a flop because it is. Its ratings are awful!

I do say it’s bad because it’s objectively poorly-made. The shaky-shaky-, zoomy-zoomy, drifty-drifty may be done on purpose but affecting incompetence is just not a style. It’s just poorly-made, and the reason why so few people watch it.

And I don’t see that at all. The script is tight, the actors are fantastic and their comedic timing is top notch. You don’t like it but it doesn’t mean it’s bad, it just means you don’t like it.

I guess not everything can be as tight as CSI or NCIS.

Again, the script can be as “tight” as it wants but the zoomy-zoomy, shaky-shaky makes it a poorly made show. It also has horrible ratings, so while you’re entirely free to like what you want, I am clearly not in the minority on that one. As for CSI and NCIS which you seem to disrespect, CSI in its first season was a masterpiece and while the current show is no longer a hit, the original seasons were the last smash hit on any network. Similarly NCIS is one of the two last remaining real hits on TV. PArt of the… Read more »

It is time this idiotic show was put out to pasture.

Totally agree. Flop and Recreation is a horrible show with inept camera work and directing and Amy Poehler is not a star or funny.

That this horrid flop lasted seven years shows how much money is wasted due to cronyism.

Or maybe people actually like it and that’s why it lasted. Your taste is not the only one that matters.

This is the show that explains U.S. TV’s fall into irrelevance: A badly-made flop that was renewed for years and years because it was made by the “right” people.