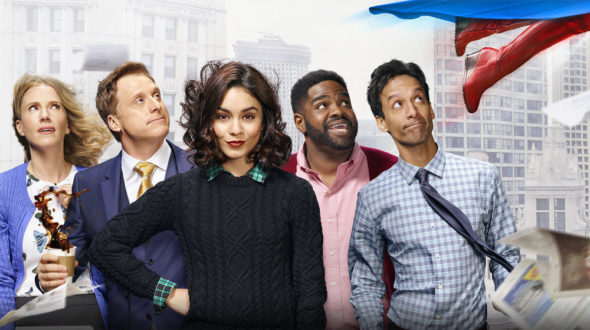 Will there be a second season of Powerless? Recently, NBC boss Jennifer Salke discussed the future of the TV series, Deadline reports.

During a recent conference, Salke said the numbers are disappointing but NBC is still behind the show:

[Powerless] did not open to the most exciting numbers which was OK because we thought it would be viewed by a digital audience really strongly. We’re still looking at it. I just wish it was performing better, but we haven’t made decisions. We’re going to continue to air it and we’re behind it.”

What do you think? Do you watch Powerless? Do you think it should be renewed?

Incredible show. Vanessa is perfect for this and I love Danny and Ron so much. Not to mention Alan. but if you know the industry this is called PR Speak and it’s probably certainly dead. Not that they’d tell you with half the season left to air! 🙁 Let’s hope for a miracle.

Powerless is a great TV series on NBC! I really hope it gets more seasons! Last year I watched Telenovela on NBC and they cancelled that and I was so disappointed so I hope they don’t cancel this too

It has it’s funny moments.. but why is it sooo cheesy? and why is Vanessa’s character the same one from those high school musical movies. It’s just over the top.. I would’ve enjoyed the show more if it was a little more down to earth… less theatrical… I feel like they’re going to break out into song any minute.

interesting how people differ. that’s literally why i love this show.

I love it! I think it’s doing something that no other superhero or comic book show/movie is doing. It’s light and fun and incredibly human, but without taking away the scale and excitement that’s unique to the genre.

I didn’t even hear about Powerless until I saw a promo for it while watching The Voice, It’s good and has potential to be even better they shouldn’t give up because it has a great cast,and a great story. They should promote it more I guess.

I love the show. Would love to see it catch ground. Get some character development, and be as funny as parks and recreation or the office.

Please keep Powerless it is funny and I love the superhero references in the show. I record it and watch it on my day off with a couple other shows I watch.

I think Powerless has a lot of potential. Fantastic cast, Vanessa Hudgens is beautiful and quirky as Emily and Alan Tudyk steals every scene he’s in as Bruce Wayne’s inferior cousin.

It’s a shame that quirky and oddball humor comedies like this aren’t given more of a chance. Powerless reminds me of Better Off Ted in some ways which was another great show that had a great cast, great humor and was cancelled after what seemed like two really short seasons.

Be the comedy Hero we need and give Powerless a chance NBC!

I love this show. Clever unique ideas and cast!

Please keep Powerless! It’s got an amazing cast and deserves a chance.

I watch it digitally through PlayStation vue

I really like Powerless. Vanessa Hudgens is really great and so beautiful. Ron Funches and Danny Pudi are really awesome as well. NBC has to give this show a chance to hit its stride.