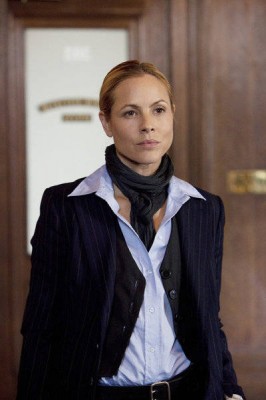 Last night, NBC burned off the final two episodes of Prime Suspect. The TV series has been ratings-challenged right from the start and, in November, NBC acknowledged that they wouldn’t be ordering any installments beyond the initial 13 episode order. The official word was that they would re-evaluate once all of the episodes had aired but everyone knew that it was really being cancelled.

If there was even a glimmer of hope that Prime Suspect might see a second season, the ratings for the final episodes didn’t help. Prime Suspect’s numbers continued to dwindle in the latter part of 2011. Last night, following a month hiatus, the finale registered a new series low.

Prime Suspect has been all but officially cancelled by NBC and its replacement, The Firm, is doing even worse. Last Thursday’s episode registered a 0.9 rating for its fourth episode. It took Prime Suspect 10 weeks to drop that low. Fortunately for fans of The Firm, NBC purchased 22 episodes up front. It remains to be seen if they’ll all air.

At the recent TCA press tour, NBC execs noted that, had Prime Suspect been on a premium cable channel like Showtime, it would have been declared a hit and would have been quickly renewed. Maybe but we’ll never know.

What do you think? Are you sorry that this was the end of Prime Suspect? Why do you think it didn’t catch on? Would it have been a hit on HBO or Showtime or even on a basic cable station like TNT?

I don’t watch many police televisions programs since they are usually showing police violating civil rights, beating suspects and drawing their weapon on anything that moves, endless amount of ammunition in gun fights, and reckless car chases that has every unit chasing one suspect and some times causing more damage than not. (Believe it or not current law enforcement courses discourage these practices for liability reasons) I believe these overzealous plots (while may be entertaining to some) may have the opposite effect in the real world where citizen believe crimes can be solved in one hour, witnesses provide detailed information,… Read more »

Prime Suspect caught my attention from the get go. It was a raw, realistic, and well written police/detective series with well casted characters who were convincing, and who had interesting an dynamic between them. Cancellation was a disappointment. I will purchase the available episodes of the show for nights when all that is on is “Unforgettable” or “The “Mentalist”! If I wanted to watch something as rediculous as a detective who remembers EVERY day, minute, and second of her life with visual precision, OR, a guy who can determine a suspect’s guilt simply by observing the way he winds his… Read more »

With so little cross-network advertising, it is difficult to discover programs of interest.

I totally agree. Prime Suspect was a wonderfully well-written, well-acted show that most likely would have risen above the low ratings if given a chance. In this day and age of reality shows and other worthless sitcoms, for a show as good as Prime Suspect to come along is refreshing. I will definitely miss this show, particularly the lead character, portrayed by Maria Bello. She did an amazing job in the role as detective Timony. What a great loss. I am getting sick and tired a great shows being given the boot! These damn networks get you hooked into a… Read more »

It was an unusually great show for network Television. I loved Maria Bello as Timony. She wasn’t as messed up or complicated as the Helen Mirrin character (Tennison), at least not as she had been written thus far, but she certainly had her own set of challenges to deal with. I don’t really like cop shows that much. For me the characters have to be interesting on their own and in their rapport with one another. Prime Suspect accomplished this in my opinion, with really good acting to boot. I’d say NBC is nuts to cancel this show, but honestly,… Read more »

I had never even heard of this show, until it came up on Hulu Plus! What a great show that never got a chance! I really hope someone picks it up!

I genuinely never leave comments on any site, but Prime Suspect was easily one of the best written, best performed, and true quality shows to come along in a very long time. I genuinely think the network did the viewing public a disservice to have given up on one of the only dramas on the traditional network channels that was worth following so quickly. I miss it already. And replacing it with The Firm was salt on a fresh wound.

We love Prime Suspect, it was a very clever and well acted show! Bring it back

I loved it. I miss ER, and NYPD Blue….this was right up there.

GREAT SHOW! It wasn’t that it was “not ready for prime time”, it was “Too much for Prime time. I love all the characters. NBC let a good one slip by. TNT, AMC, sombody do us a favor and pick this show up.

[…] season alone, two of NBC’s most anticipated new Thursday night TV series — Prime Suspect and The Firm — have flopped. Is Awake different? Will it be cancelled or survive to see a […]

[…] as being the likely straw, one of the freshman shows on NBC kicked the bucket. That bucket was Prime Suspect. The network shifted things around and announced that Community was returning to Thursdays to […]

Prime suspect was one of my favorite fall shows! 13 episodes are not enough to determine a hit! Please let another station pick it up!

This was one of our favorite shows! We hope that someone picks it up so that we can continue to watch it. Too bad NBC was only interested in ratings. Great acting and great plots!

I loved this show. If NBC hadn’t bounced it all over the fall schedule the ratings would have improved, not crashed and burned. I’ve rediscovered it on Hulu+–if USA or TNT would just pick it up, it would be a bigger hit than Southland.