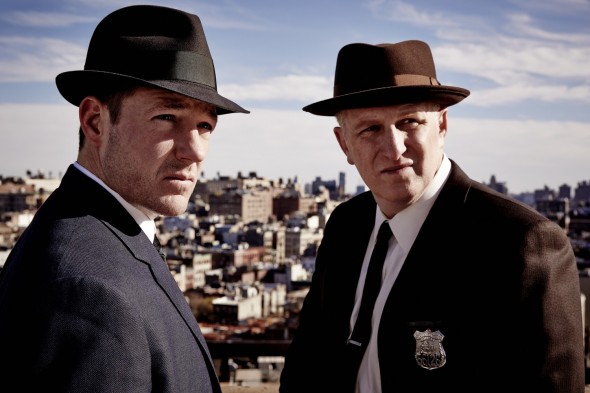 TV show description:
Set in the Early 1960s New York, this crime drama revolves around the members of the Public Morals Division. It’s a plainclothes unit of the NYPD whose job it is to police vice crimes such as gambling and prostitution — laws on the books that no one wants enforced but that curb all kinds of sin and vice. These cops do what’s been done for the last hundred years — they manage it for the city. This all might come to an end when a war between two factions of the Irish Mob breaks out in the Hell’s Kitchen neighborhood.

As the patriarch of two families — his own household, as well as the Public Morals division — Officer Terry Muldoon (Edward Burns) faces a number of challenges as he tries to maintain control over his tightly ordered world. Christine Muldoon (Elizabeith Masucci) is his wife. She is an independent, attractive and tough mother of three. She is very loving but doesn’t take any crap from anyone, even her husband.

Muldoon’s partner is seasoned veteran Charlie Bullman (Michael Rapaport). He’s a dedicated family man who goes against his better judgment and this lands him in a difficult relationship with a high-end call girl named Fortune (Katrina Bowden).

Vince Latucci (Wass Stevens) is a dapper and cocky plainclothesman, who enjoys all the perks of the public morals division, which usually gets him into hot water with his wife. Sean O’Bannon (Austin Stowell) is Muldoon’s hot-headed and handsome cousin who enjoys attention from the ladies and also likes the benefits of being a Public Morals officer.

Petey Mac (Patrick Murney) is the most easy-going and affable member of the division. He loves his job and lives in constant fear he will be bounced from the unit. Jimmy Shea (Brian Wiles) is a handsome, clean-cut cop and the newest member of the team. His arrival in the office puts everyone else on edge.

Lieutenant Lonnie King (Ruben Santiago-Hudson) is a smart and stylish lieutenant who also happens to moonlight as the leader of a group of vigilante cops.

Pat Duffy (Keith Nobbs) is a fast-taking street urchin. Recently released from prison, he finds himself working as a stool pigeon for Muldoon. Deirdre (Lyndon Smith) is Duffy’s independent and strong-willed sister. She is attracted to O’Bannon, and they develop a complicated relationship.

Series Finale:
Episode #10 — A Thought and a Soul
The streets of Hell’s Kitchen run red with the blood of the Irish Mafia, as the west side war comes to a head. Muldoon treats Christine to a night on the town, and makes a decision. Duffy gets surprising news from Deirdre. As Bullman’s feelings for Fortune intensify, he’s forced to make a decision about their relationship.
First aired: October 20, 2015.

What do you think? Do you like the Public Morals TV show? Do you think it should have been cancelled or renewed for a second season?

Every time TNT puts a decent show on the air, they cancel it after one season leaving 5 reruns of Castle a day or the 500th rerun of Law and Order!! Idiots. Are the program directors complete morons or what? There was no hype for the show … you had to stumble upon it. And when did a thoughtful show hit it’s true stride in10 episodes? To the program directors … are any of you older than 22?

Great show. PLEASE BRING IT BACK!!!

At one time I gave credit to TNT for providing us great shows but now all they do is cancel those great shows, like Agent X, Legends, Proof, Public Morals and others. I still love The Librarians but I am not sure where that show is going anymore and my favorite Major Crimes. They are becoming more like ABC who constantly cancels good shows and leaves you hanging many times with no great ending.

i really don’t understand how they can cancel this one. Great story line and the selection of actors was perfect. I was really looking forward to more of this show.

this was a great show, TNT is stupid, probably a bunch of imbeciles, Crazy to cancel a real great show

WHY ARE THEY CANCELLING ALL THE GOOD SHOWS???? This was one of my favorites!

Love this show, please do not cancel it. Great actors especially Edward Burns.

incredible series – love the 60s feel of every facet.

Hope it gets renewed. Love this show !!

One of the best new shows on tv!! please renew!

Please do not cancel. This is one of our favorites!

I agree it a good show