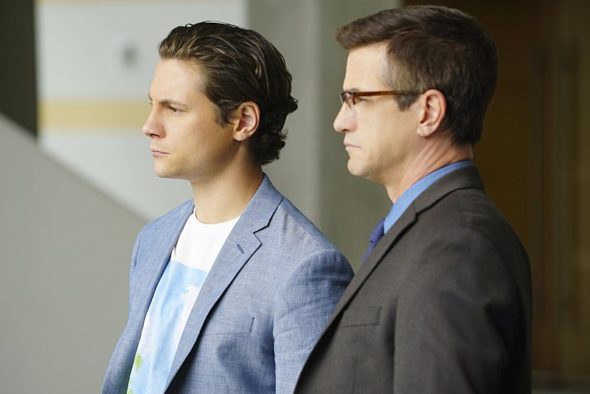 What happened to Pure Genius? Recently, star Augustus Prew spoke with TVLine about the CBS series and why it’s likely to be cancelled.

The drama follows top medical professionals as they team up with cutting-edge tech experts and try to push the boundaries of modern medicine to save lives. The cast includes Prew, Dermot Mulroney, Odette Annable, Reshma Shetty, Aaron Jennings, Ward Horton, and Brenda Song.

Season one of Pure Genius finished in January after CBS decided not to order more episodes—a bad sign for any chance of a renewal. Additionally, ratings for the medical drama were not good. Over the course of 13 episodes, the series averaged a .86 rating in the 18-49 demo and 5.342 million viewers, making it one of the network’s lowest-rated and least-watched new series for the 2016-2017 season. It’s unlikely the show will be renewed for a second season.

Speaking to TVLine, Prew said he thinks Pure Genius had an identity crisis:

Prew later added that the show’s lack of direction was what brought it down:

CBS and Jason had slightly different visions of what they wanted the show to be, and as a consequence we weren’t enough of either, if that make sense. If it’s going to be a procedural, we should have done a procedural and taken out of the character development. And if it was going to be about these characters and their lives and coming to terms with their own mortality — which is what I wanted the show to be about — we should have pushed that further. … It lost its reason to be. I think that’s where we fell down, if I’m looking at it under a new light.”

What do you think? Did you see Pure Genius? Do you think CBS should renew the show?

I really liked the show. I really hope it does not get cancelled. The network and readers need to make a Go of this show and the potential.

I really liked the show and feel the viewers did not give the show a chance. The actors did a wonderful job. Please don’t cancel Pure Genius. Thx

This was my favorite show of the season. I am very disappointed that it was canceled! Was really looking forward to watching every episode of Season 2.

I taped “Pure Genius’ on my DVR and am just now getting around to watching it. I love the mix of technology and how it can be used to solve medical challenges. It’s nice to have an intelligent show out there that explores the possibilities of our near future. It would be a shame to cancel it without giving it a chance to evolve.

I really liked the show because it WAS both procedural and character driven. Why can’t a show be both? I’ll miss it!

This is a fresh and very unique show, which can not be put into a category. It’s time to break out of the old standards and start a new on: compassion for the human spirit. I love, that the show has combined cutting edge technology and that it is using, the new innovations in the medical field. THERE IS NO SHOW LIKE THIS, ON TV NOW. CBS, please be the innovative network and keep PURE GENIUS, ON THE NETWORK..

I really like this show.
I wish they would change there mind and NOT to cancel the show.

I loved this show! I watched it with my folks. It was uplifting and hopeful. Exactly the type of show we need right now.

I thought the show was brilliant. Loved the premise, storylines, and actors. Will be extremely disappointed if CBS cancels this series.

Pure Genius should be given a 2nd season, the cases were interesting and it was a show that didn’t involve a lot of adult trash, plus Dermot Mulrouney is an awesome actore. I really hope they decide to keep this show instead of leading me to lose faith in TV in general, especially after heartbeat last year, medical shows just don’t do well, unless you’ve been on the air forever like greys and ER was.

I LOVE “Pure Genius”…great show and great cast. It deserves a 2nd season!! Why cancel the great shows to put garbage in their place?? KEEP THIS SHOW!!! Maybe SyFy can pick it up….they have GREAT programs and this could be another one for them!

My husband’s passion is healthcare. Mine is education. Together we absolutely loved this show. It was hard to watch at its late (too late in our market) scheduled time, but this one we would not miss! Pure Genius’s science, we are hoping, is a prophecy for what is possible, and probable in the near future. 1) the science was number one for us 2) the character development was secondary and not as important 3) with that said, we thought all the actors involved, nailed it. PLEASE BRING THIS SHOW BACK!!!! It was the highest quality major network program option we… Read more »

Once again another good show with great cast and interesting story bites the dust. Why do they always cancel the good shows and give us reality garbage? There’s so much more they could do with this show.