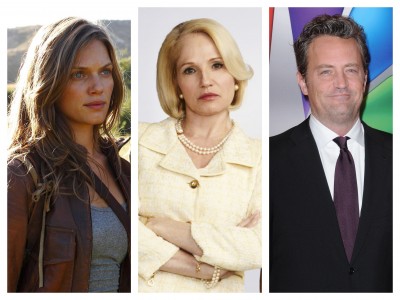 The peacock network has handed down their first full season orders to Revolution, Go On, and The New Normal — three new shows.

Revolution’s third episode aired last night, following The Voice. The drama is the network’s highest-rated scripted drama of the season. The first two episodes have averaged a 3.8 demo rating with 10.43 million viewers.

UNIVERSAL CITY, Calif. – October 2, 2012 – On the heels of winning its first premiere week in the A18-49 demographic in nine years, NBC has picked up three of its new fall series – the adventure-drama “Revolution” and the comedies “Go On” and “The New Normal” — for full-season commitments for the 2012-13 season, it was announced today by Jennifer Salke, President, NBC Entertainment.

“We’re impressed with the imagination and creative direction of the entire team on ‘Revolution,’ not to mention the immediately strong response we got from the audience,” said Salke. “Ordering the full season of this show is a pleasure. Thanks to J.J. Abrams, Erik Kripke, Jon Favreau, and everyone at Bad Robot and Warner Bros. Television for their dedication to making a truly unique series. And I personally love to escape into a world where there is no power, the phone doesn’t ring, and the pace of life slows down — if only for one hour a week!”

She added: “We’re also very proud of our new comedy block of ‘Go On’ and ‘The New Normal.’ In partnering with Matthew Perry for ‘Go On,’ creator Scott Silveri has created a comedy with a highly original voice that deftly combines humor and emotion. And Ryan Murphy and Ali Adler have created a truly unique family in ‘The New Normal’ that is reflective of the changing dynamics of the world we live in. These shows are both welcome additions to our new lineup!”

“We’re very pleased with early results of the last three weeks of our fall season roll-out,” said Robert Greenblatt, Chairman, NBC Entertainment. “The strategy for this season was to draft off the promotional platform of the Olympics and then begin our season early and strong. I think we’ve accomplished both of those goals, yet we know it’s a long season and there’s much work ahead of us. We are so appreciative of all the great talent that is working so hard on these shows.”

“Revolution” is averaging a 3.6 rating, 9 share in adults 18-49 and 9.8 million viewers in “live plus same day” results through its first three telecasts. “Revolution” debuted on September 17 with the highest 18-49 rating (4.1) for a premiering drama on any network in three years (since ABC’s “V” on October 3, 2009, 5.2) and the highest for a premiering NBC drama in five years (since “Bionic Woman,” September 26, 2007, 5.7). And in the two weeks since then, “Revolution” took on premiering competition from ABC’s “Castle” and CBS’s “Hawaii Five-0” and led that competition in every key demographic both weeks. And the first two weeks of “Revolution” have set time-shifting records for NBC, growing by 1.36 ratings points in 18-49 in week one and then 1.74 in week two when going from Nielsen’s “live plus same day” ratings to its “live plus three day” data. Those are the two biggest increases ever for an NBC telecast. Among series on ABC, CBS, NBC and Fox, only ABC’s “Modern Family” has ever earned a bigger increases than “Revolution’s” week-two gain of 1.74.

“The New Normal” is averaging a 2.2 rating, 6 share in adults 18-49 and 6.0 million viewers overall through its first three regular-slot episodes, according to Nielsen Media Research. The most recent “New Normal” telecast retained 74 percent of its 18-49 lead-in from “Go On,” matching its best retention to date and up from 65 percent the prior week. And in “live plus three day” ratings that add time-shifted viewing for the first three days after live broadcast, last week’s “New Normal” increased its retention of “Go On” to 87 percent (with a 2.77 rating vs. a 3.19). What would you do without it all? In this epic adventure from J.J. Abrams’ Bad Robot Productions and “Supernatural’s” Eric Kripke, a family struggles to reunite in an American landscape where every single piece of technology — computers, planes, cars, phones, even lights — has mysteriously blacked out forever. A drama with sweeping scope and intimate focus, “Revolution” is also about family — both the family you’re born into and the family you choose. This is a swashbuckling journey of hope and rebirth seen through the eyes of one strong-willed young woman, Charlie Matheson (Tracy Spiridakos, “Being Human”), and her brother Danny (Graham Rogers, “Memphis Beat”). When Danny is kidnapped by militia leaders for a darker purpose, Charlie must reconnect with her estranged uncle, Miles (Billy Burke, “The Twilight Saga”), a former U.S. Marine living a reclusive life. Together, with a rogue band of survivors, they set out to rescue Danny, overthrow the militia, and ultimately re-establish the United States of America. All the while, they explore the enduring mystery of why the power failed, and if — or how — it will ever return.

Matthew Perry (“Friends,” “Mr. Sunshine”) stars as Ryan King, a recent widower and sports talk radio host ready to get back to work after the loss of his wife. Ryan’s alpha-male boss, Steven (John Cho, “Star Trek,” “Harold & Kumar Go to White Castle”), has a different plan in store for Ryan, making him attend grief counseling before returning to the air.

A reluctant Ryan finds himself in a support group for “life change” where he meets an oddball cast of characters. Ryan’s total lack of interest in “the healing process” proves distracting, and he soon butts heads with the by-the-books group leader, Lauren, played by Tony Award-winner Laura Benanti (“The Playboy Club”). Back at work, Ryan is confronted with the fact that he hasn’t really processed his grief and realizes Lauren and the other members of the group might be key in helping him move on.

In addition, Lauren Graham (NBC’s “Parenthood”) will guest-star in an upcoming episode of “Go On” as Ryan King’s (Perry) old college friend and his former radio talk show co-host. An airdate for Graham’s episode will be announced later. Multiple Emmy Award winner Bob Costas from NBC Sports and Chris Bosh from the NBA’s world champion Miami Heat also will appear as themselves in additional episodes.

These days, families come in all forms – single dads, double moms, sperm donors, egg donors, one-night-stand donors — It’s 2012 and anything goes. Bryan (Andrew Rannells, “Girls,” “The Book of Mormon”) and David (Justin Bartha, “The Hangover”) are a Los Angeles couple and they have it all. Well, almost. With successful careers and a committed, loving partnership, there is one thing that this couple is missing: a baby. And just when they think the stars will never align, enter Goldie (Georgia King, “One Day”), an extraordinary young woman with a checkered past. A midwestern waitress and single mother looking to escape her dead-end life and small-minded grandmother (Emmy and Tony Award winner Ellen Barkin), Goldie decides to change everything and move to L.A. with her precocious eight year-old daughter. Desperate and broke – but also fertile – Goldie quickly becomes the guys’ surrogate and quite possibly the girl of their dreams. Surrogate mother, surrogate family.

What do you think? Do you like any or all of these NBC shows? Are you glad to hear that they’ve been given full seasons?

The best show ever !!! Great story, great actors everything perfect !!!

Go On is good & Perry is entertaining. The New Normal is unfunny.

Anything starring the bully from Atlanta Housewives, NeNe leakes should not only be cancelled but the film rolls should be burned. Why NBC feels she even belongs in a show requiring acting is beyond me. Doesn’t help that the show is not close to funny. It’s inane. I love Revolution and tolerate Go On…

I do enjoy Revolution. The New Normal, not so much

NBC just sucks, period…cancel all the above

Not creative enough. I’ve been watching but it’s soon to be on MY canceled list. Predictable plot. Charlie drives me nuts. The writers make the characters do things that don’t make sense. And every move is SO PREDICTABLE I feel like I could write the whole script. J. J. Abrams is NOT a God.

I am so glad that they gave Go On a full season, because 13 episodes would have been a waste of such a great cast. With all of the great actors and characters on the show I am sure that they will get a ton of mileage out of that one. I haven’t been watching Revolution, and one episode of The New Normal was enough for me.

Revolution is still iffy on my list. Not the best cast choices and the story suffers from the whiny niece/arrogant uncle cliches.

Go on and Revolution I understand but the new normal? Still I haven’t laughed too many times after the first few episodes, but OK I guess. Just ordering a full season for 30 Rock or Whitney would have been a better choice. Just saying.