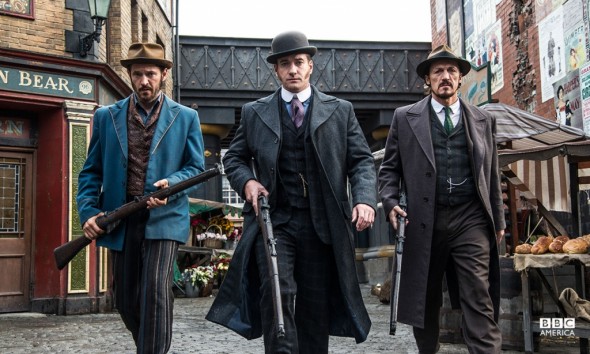 Ripper Street is headed back to the States. BBC America recently announced that season four of the UK drama will premiere this summer.

Set in Victorian London, the historical drama stars Matthew Macfadyen, Jerome Flynn, and Adam Rothenberg. The series moved to Amazon in the UK when the BBC cancelled it after two seasons.

Earlier, Amazon announced that season five would be the last season for Ripper Street. Season four will premiere on BBC America on July 28th.

What do you think? Are you a fan of Ripper Street? Will you watch season four?

I loved watching on the internet but now have Direct tv and am very disappointed I can’t find it on any channels.

I missed it! It’s not available on U-Verse On Demand. Will it be re-broadcast?

Love this show!!!! The characters are great. Nothing else like it on tv.

I love Ripper Street! Disappointed to see it so early on the schedule, however and am wondering if there will be a Ripper Street Weekend so I can catch up on Season 4 episodes. Five PM CST is an odd time for a series of this nature. Kids are watching TV and adults are just getting off work. More info please!

Why airing at 5pm CST on BBC America?

We can’t wait to see season 4 AND season 5. Ripper Street is one of our most favorite shows ever!!!

One of the most well written shows on TV in a very long time. I have been on pins and needles waiting for season 4.

One of one the most remarkable TV series in a life time. I paid much more attention to this series than I did to Breaking Bad. Matthew Mcfayden is an outstanding actor. In truth I have watched the first three series three times!

When will Ripper Street be aired on BBC in the UK? We can’t access Amazon Prime in Ireland !!!!!

Just finished to watch the show season one to three in Netflix, love it can’t wait for season four. And I agreed with L Luciuk.

Love this show. It is amazing – well written, directed, acted. Luckily we get extra seasons 🙂

A great series, one of the best on Netflicks, intelligent, edgy, very clever and far, far better than most of what is shown on mainstream TV in North America.

And completely made in Dublin, Ireland !

That my friend is the icing on a fabulous cake!