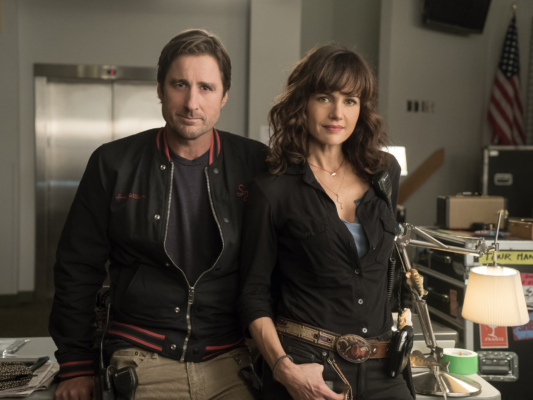 Roadies is packing up the stage. This week, Showtime announced the series has wrapped production on its first season.

The season one finale of Roadies airs on August 28th at 10 p.m. ET/PT.

NEW YORK, NY – July 13, 2016 – Today, SHOWTIME wrapped production on the first season of the freshman music series ROADIES with an impressive roster of musical acts set to appear in the season finale, which will air on Sunday, August 28th at 10 p.m. ET/PT. The one-hour episode will feature music personally curated by series creator, executive producer, writer and music supervisor Cameron Crowe, and performances from Jim James, Eddie Vedder, Nicole Atkins, Jackson Browne, Robyn Hitchcock, Jess Wolfe and Holly Laessig from Lucius, and Gary Clark Jr. The ROADIES soundtrack will be released by Republic Records and Stardog Records. Previously announced tracks include “I Wish I Was Sober” by Frightened Rabbit featuring Mike McCready, “Are You Satisfied?” by Reignwolf, and “Big Love” by Lindsey Buckingham.

The hyper-eclectic music featured on ROADIES includes works from artists as wide-ranging as Bob Dylan, The Ramones, The Replacements, The Ting Tings, Jeff Buckley and more. Many of music’s best are appearing in the series, including Lindsey Buckingham, The Head & the Heart, Lucius, Halsey, Jim James and Reignwolf, who also contributes some of the score for this season’s second episode. Joy Williams (The Civil Wars) guest stars. Crowe, with help from ROADIES producer and Stardog Records label president Kelly Curtis, hand-picked the genre-bending, decade-spanning mix of new and classic rock, indie, folk, bluegrass, electronic, and blues and more. Featured music includes an extremely rare, never-before released cover of Bob Dylan’s “Farewell Angelina” by Jeff Buckley and Gary Lucas, “Dreams of Flying” off of Tom Petty’s band Mudcrutch’s recent record, Buckingham’s “Bleed to Love Her” and “Big Love,” Hannah Huston from The Voice on “I Can’t Make You Love Me,” “Loudmouth” from the Ramones and “Given to Fly” by Pearl Jam. The songs will at times reflect some of the Staton-House band tour stops – in the episode in which the band performs in Atlanta, the music includes “Kick Your Game” by the Atlanta trio T.L.C. and the live version of “Oh Atlanta” by classic band Little Feat.

Curtis, who has managed Pearl Jam since the band’s inception in 1990, worked on several of Crowe’s films: as a researcher on Say Anything, an associate producer on Singles, and a tech advisor on Almost Famous.

What do you think? Have you seen Roadies? Do you think it will be renewed?

It is the only show I watch that makes me sad when it ends. I love it, please don’t cancel.
WWPD

We just finished watching the first season and have loved every show!!! Please don’t cancel it. It is the only show we watch that is not based on crime… We love the music and camaraderie if the cast.

Love it bring it back!! I’m a hip op head. But thi show touched me. Not just the music the relationships, life, the metaphors. C. Crowe is a !! All haters need to stop there is plenty of room for a show like this

I LOVE this show and will be so very disappointed if it’s not renewed. It’s original, full of good music, quirky personalities and one of the only good shows I’ve found on TV in the past couple of years! Renew renew renew!!!!

Hey; this show keeps getting better. And I liked it from the first episode. Please renew for another season. Actors and music are excellent.

I love this show! Please keep it on the air!

I love roadies. I hope it’s renewed. A fabulous hour of music and stories of like.

I love Roadies. I think the episode with Phil telling his epic story about Lynyrd Skynyrd was the highlight of the season and I will remember it for the rest of my life. That alone should be reason enough to renew the show. By the way, I hope they find some way to write Phil back into the show somehow. He was such a great character, I can’t imagine the show without him.

I love Roadies. Not finding many shows I truly enjoy BUT, this show I did. Who couldn’t love Phil. Why kill him off. I am with another fan be creative bring him back. Please don’t cut this show. I will be truly saddened if Showtime cuts this show. It is great to watch something cool and it doesn’t have aliens, zombies, or vampires.

I love the show! The characters have amazing chemistry I really look forward to each episode and think it hasn’t been given enough credit. I also like being introduced to musicians and new music. Please renew!!!!

Love this show!!! Please come back for season 2…Ron White as Phil was awesome!!

Renew Roadies and bring back Phil. It could have been a dream that he wakes up from in the shower…lol

Renew Roadies! What a shame it would be not to renew such a great television show. Compared to some of the drivel that passes for TV programming, Roadies is exactly the type of show that television needs more of.