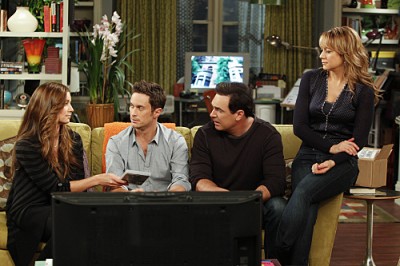 The wait is over. CBS has renewed Rules of Engagement for a seventh season of 13 episodes. A representative for the network tweeted, “This Just In: new episodes of #RulesofEngagement have been ordered for midseason on #CBS”

The venerable sitcom has been a solid utility player for CBS and has been shuffled around the schedule several times since 2007.

Last May, Rules was renewed for season six and it was announced that it would be moving to Saturday nights, the first time in several years that an original sitcom had aired on CBS on that night. There was speculation that the network made a discounted deal with Sony Pictures TV so that the studio would have additional episodes of Rules for syndication.

Following the quick cancellation of How to Be a Gentleman, CBS returned Rules to Thursday nights.

Despite the fact that it was performing well, CBS later opted not to order a full season of Rules. The 13 episodes of season six were combined with three leftover episodes from season five.

The cast and crew were given the news shortly before the last two episodes were filmed. According to our source, those who worked on the show were quite upset and believed that the show was indeed finished.

CBS put Rules on hiatus to introduce another new sitcom, ¡ROB!, but that one didn’t perform any better. CBS cancelled ¡ROB! last week.

When Rules wasn’t on CBS’ 2012-13 schedule, things didn’t look good for the venerable sitcom. However, discussions between CBS and Sony were reportedly still ongoing. Both sides seemingly wanted to make the renewal happen.

CBS has now renewed Rules for a seventh season of 13 episodes. They’ll kick off mid-season and this order will bring the show’s episode total to an even 100 installments.

What do you think? Are you glad to hear that Rules of Engagement has been renewed or do you think it’s time to cancel it? Should this be the final season?

Funny show! Why would they want to get rid of it! I can’t get enough!

This is one of the best comedies on TV. I can not wait until the new season arrives. Please let us all know when the expected date of the new season 7 is to air.

I love Rules of Engagement and never miss it.

Please, please, keep renewing this show!! I just found this show in the last couple of years and I am addicted to watching all the reruns. I love the cast and everything about the show–very funny, but also relatable. I am trying to collect all seasons on DVD now. This is the best comedy out there and the Big Bang Theory comes in second to me.

My husband and I love both David Spade and Patrick W … Been looking for it for over a year . So GLAD to hear we will have 13 more shows !

One of the funniest shows I’ve seen in along time. I will be REALLY upset if it ever gets canceled.

love the show. very funny! glad its coming back.

So glad to hear this funny, funny show has indeed been renewed! I wish it was for the full season!

It is a wonderful series and should certainly be given a full season. At 7:30 on Mondays, I will be turning off CBS and reading a good book. M&M, Partners, and 2 Broke Girls are just too lame to watch

this is one of the funniest shows i’ve seen,alot funnier than these shows that people think are funny,but are not. cbs should renew it for a full season.

The absolute FUNNIEST show on TV! Why would they even THINK of cancelling it!
And keep it on for FULL seasons, not these abbreviated HALF seasons!

ROE is possibly one of the best sitcoms around today. It is one of the few shows that actually pulls me away from HBO.