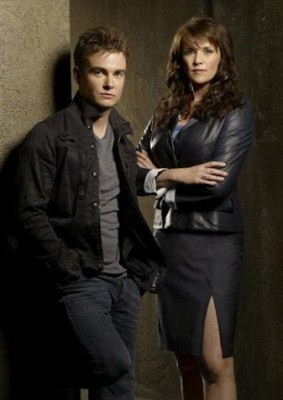 It’s the bad news that we suspected was coming. Syfy has cancelled Sanctuary after four seasons on the air. The defacto series finale aired on December 30, 2011.

The series began as a series of free webisodes that were released in 2007. Syfy picked up Sanctuary as a regular series in 2008 and ended up producing 59 episodes over the show’s four season run.

The last episode of the fourth season of Sanctuary aired in December and as time has gone on, it seemed to become apparent that the cable channel wouldn’t be producing any more.

Craig Engler, the senior VP and GM of Syfy, broke the news of the cancellation today. He tweeted, “Just landed and I see we have a sad announcement today: #Sanctuary will not be back for a 5th season.”

What do you think? Are you sorry to hear that Sanctuary won’t be back for season five? Was the news a surprise?

Sanctuary 5 cancelled dont they know what a great sreies it was been waiting for its to return and find its cancelled tipicle of execs who dont check viewers opion orr hot sales of the series run .stupid mad fan

tHERE GOES ANPOTHER GREAT SHOW THAT WAS NOT GIVEN A CHANCE FOR A FINL ENDING. tv EXECUTIVES SHOULD BE SENT TO MIDDLE EART

Loved the show sanctuary why do they always cancel the good ones. You took star gate and fringe what’s next. Please don’t take Merlin if so I will not watch sy fy anymore.

Yes i think it really sucks that Sanctuary 5th season will not be back. Seams like every time i find a show i really like it gets taken off and some stupid reality show gets put on.