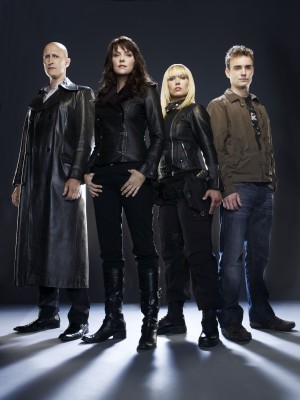 Syfy has made some announcements regarding the upcoming fall schedule. The cable channel will debut several original movies as well as launch the fourth season of Sanctuary on October 7th. A season three marathon will precede it on October 3rd.

NEW YORK – August 23, 2011 – Syfy will take the chill out of the air with a robust fall programming lineup featuring the series premiere of Paranormal Witness, the annual spook-a-thon 31 Days of Halloween culminating with Ghost Hunters Halloween Live telecast, and the 4-hour movie event Neverland, an original prequel to Peter Pan featuring Oscar nominee Keira Knightley as the voice of Tinker Bell.

Syfy’s fall primetime schedule will also include the return of hit series Fact or Faked: Paranormal Files, Sanctuary, Scare Tactics, and the Saturday Original Movie Zombie Apocalypse, as well as the season finales of the hit scripted series Eureka, Alphas, Haven and Warehouse 13.

PARANORMAL WITNESS (NEW ORIGINAL SERIES)
Wednesday, September 7 at 10PM – Paranormal Witness teams with 9PM lead-in Ghost Hunters to anchor the fall’s Wednesday prime paranormal programming block. This tense, filmic and high-octane drama-documentary series brings to life the real stories of people who have lived through paranormal experiences that defy explanation. Using a mixture of intimate first-hand testimony, actual home video and gritty realistic drama, Paranormal Witness transports viewers into a world turned upside-down by extraordinary, terrifying and sometimes life-threatening paranormal events. The season premiere episode showcases two stories with spine-tingling, first-person narration. The episode begins with “Emily the Imaginary Friend,” a story about a young Baltimore family whose life is turned to chaos when they move into a new home and their 5-year-old daughter makes friends with an invisible girl named Emily. At first, Emily appears as a harmless playmate. Then, signs of mischievous behavior and household items moving or breaking start to occur in the house. The parents initially assume this could be uncharacteristically naughty behavior from their daughter, until the mischief turns increasingly more sinister and threatening towards the family members. The second story is “The Lost Girl,” where a mother and daughter relive an unexplainable encounter along a rural dirt road in Florida with a mysterious girl who carries a shocking secret.

31 DAYS OF HALLOWEEN and GHOST HUNTERS HALLOWEEN LIVE
Saturday, October 1, through Monday, October 31 — 31 Days of Halloween will unleash nearly 600 hours of bloodcurdling programming with original series, Saturday Original Movies and theatricals as well as ghoulish celebrations on Chiller and Syfy.com. The month-long fright fest culminates with the annual six-hour Ghost Hunters Halloween Live telecast on Monday, October 31 at 7PM (ET/PT). This year Syfy will partner with NYC & Company, New York City’s official tourism, marketing and partnership organization for 31 Days of HalloweeNYC. The joint venture will bring the popular 31 Days of Halloween to the streets of New York City.

SANCTUARY (SEASON 4 PREMIERE)
Friday, October 7 at 10PM (ET/PT) — The 13 all-new episodes of Season 4 change everything. With the arrival of the Hollow Earth refugees, the balance between Abnormals and humans is severely upset. In order to keep the peace, Magnus and team must throw out the rulebook. But forging their own way means they’re not just dodging dangerous Abnormals anymore, now they’ve got world governments and new villains nipping at their heels. Sanctuary stars Amanda Tapping as the brilliant Dr. Helen Magnus, Robin Dunne as forensic psychiatrist Dr. Will Zimmerman, Agam Darshi as Kate Freelander, Ryan Robbins as Henry Foss and Christopher Heyerdahl as John Druitt. Created by Damian Kindler (Stargate SG-1, Stargate Atlantis), Sanctuary is produced in association with Syfy and is distributed by Tricon Films and Television. Season four of the series is executive produced by Damian Kindler, Amanda Tapping, Martin Wood, Keith Beedie and Tricon Films.

SCARE TACTICS (SEASON 4.5)
Monday, October 10 at 9 pm (ET/PT) — Hosted and executive produced by actor/comedian Tracy Morgan, Scare Tactics is a hidden camera show with a sci-fi twist. The show conspires with friends and family members to lure those close to them into outrageous scenarios. Unsuspecting victims find themselves in shocking situations from alien abductions to brushes with the living dead, taking advantage of the age-old practice of friends playing practical jokes on each other. In the premiere episode, “Tracy the Tour Guide,” Tracy Morgan is on hand when one of his ancestors comes back to life in the form of a bloodthirsty mummy.

FACT OR FAKED: PARANORMAL FILES (SEASON 2.5)
Wednesday, October 19 at 10 pm (ET/PT) – Fact or Faked continues its red hot second season with six all-new episodes featuring former FBI agent Ben Hansen, lead scientist Bill Murphy, journalist Jael de Pardo, tech specialist Devin Marble, stunt expert Austin Porter and photographer Lanisha Cole. To date, new episodes this year have averaged more than 1.5 million viewers, up 57% from its first season. Fact or Faked: Paranormal Files uncovers the truth behind supernatural and unexplained occurrences that have been caught on camera. In each episode, the team searches for the most intriguing images, videos and unnatural phenomenon found online and around the world. After selecting the most compelling cases, they head into the field, attempting to recreate the video, carrying out key experiments and questioning eyewitnesses. The team investigates all the clues and evidence with the most advanced techniques and tools at their disposal, and their objective is to answer the question, “Is this real?”

ZOMBIE APOCALYPSE (SATURDAY ORIGINAL MOVIE)
Saturday, October 29 at 9PM (ET/PT) — Months after a zombie plague has wiped out 90 percent of the American population, a small group of survivors fight their way cross-country to a rumored refuge on the island of Catalina. Stars Ving Rhames. A production of The Asylum.

NEVERLAND (ORIGINAL 4-HOUR MOVIE EVENT)
Sunday, December 4 at 9PM & Monday, December 5 at 9PM (ET/PT) — Neverland, an original prequel to author J.M. Barrie’s classic Peter Pan, sweeps in time from the turbulent seas of the pirates of the Caribbean and the back alleys of Dickensian London to a world of pure imagination. The film stars Rhys Ifans (The Amazing Spider-Man) as James Hook, Keira Knightley as the voice of Tinker Bell, Anna Friel (Pushing Daisies) as Captain Elizabeth Bonny, Oscar nominee Bob Hoskins as Smee (who previously played the character in Steven Spielberg’s feature Hook), Raoul Trujillo (Tin Man) and Charlie Rowe (Pirate Radio) as one of literature’s most cherished characters, Peter Pan. Neverland is produced by Dublin-based Parallel Films on behalf of MNG Films, in association with Syfy and Sky Movies HD, and will be distributed by RHI Entertainment.

What do you think? Will you be tuning in to see the return of Sanctuary or watch any of the other Syfy programming?

I really enjoy Sanctuary and hope the recent Season 4 finale does not turn into a series finale. There were many loose ends left to be resolved, and a number of intriguing pathways into new adventures and a whole new way of operating for the Sanctuary. I thought the slow build, with clues dropped steadily throughout the season, was very well done and a real pleasure to watch. I, for one, like the cast and enjoy the interplay of the characters. I definitely would be deeply disappointed if Syfy cancels Sanctuary. They ought to be getting rid of all that… Read more »

What crap this show is. From her fake english accent that wanders in and out to the craptastic supporting cast, this show needs to be euthanised. Maybe SyFy has a crush on Amanda Tapping? I don’t know what it is but this show needs to be canceled. Set her free and maybe bring back a real Stargate series (and not the crap Universe style either!)

Sanctuary all the way.
Down with the paranormal and ghost shows…