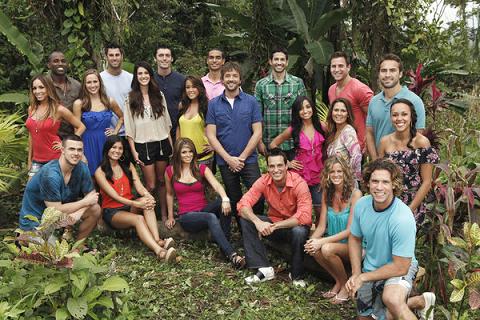 NBC recently concluded the first season of a new summer reality competition series, Love in the Wild. It’s sort of a cross between Big Brother and The Dating Game with a bit of Survivor thrown in. Those have all been on television for many years. Will Love in the Wild last as long, get a second season, or will it just be cancelled like so many others?

Hosted by Darren McMullen, Love in the Wild takes 10 single men and 10 single women and pairs them up for a variety of tough physical challenges in the remote jungles of Costa Rica. They have to depend on one another and become closer in very unique ways. During eliminations, the contestants come together and reveal if they want to stay with their current partner or if they want to get to know someone else — often causing some broken hearts. At the end of the season, one couple is left standing. Samantha and Mike won the first time around.

The reality series debuted on June 29th to a 2.2 rating in the 18-49 demographic and 6.48 million total viewers. It easily won its timeslot, opposite a CSI rerun and an original installment of Primetime Nightline.

The second episode dropped nearly 14% in the demo and the third fell 16%. By the end of the season, Love in the Wild was registering a 1.4 in the demo and was now being beaten by those CSI repeats. The first season of the reality series ended up averaging a 1.6 rating in the demo and 5.08 million viewers.

While the show’s ratings aren’t that impressive, Love in the Wild ended up being the second best performing NBC series of the summer, well behind America’s Got Talent. Since reality shows are less expensive than scripted series, it seems a fair bet that this one will be back for a second season. NBC is accepting submissions for season two though that’s not a guarantee that the show will be renewed.

But, what do you think? Did you watch Love in the Wild? Should it be renewed for a second season or would you rather see it cancelled?

this was the best show ever

Plz dont cance. all u people tht say the show sucks. stfu! cuz it dont. and im only 13 . and my favorite was adam. and my least was steele cuz he had commentment(probably spelt wrong) but i just want to say i luv and so does majority of people except the haterz! so plz **** ur self for the one who says this shows sucks and go suck ur d!ck