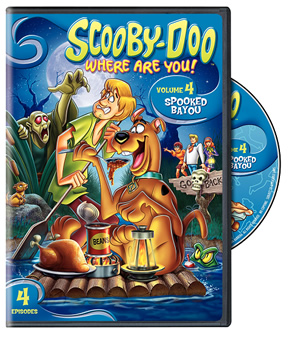 Scooby-Doo, the crazy cartoon Great Dane, got his start back in 1969 on the Scooby-Doo, Where Are You! series. The show ran for just two seasons and 25 episodes but Scooby, Shaggy, Fred, Velma and Daphne proved so popular that they’ve since starred in numerous other series, live-action movies, animated movies, comics, and much more.

Warner Bros. is currently releasing the original series on DVD in volumes. Volume four kicks off when Fred, Velma, Daphne, Shaggy and Scooby-Doo get lost in a swamp and ask a zombie for directions. Can they add up the clues to figure out “Which Witch Is Which?” Shaggy and Scooby-Doo are then captured by Redbeard the Pirate in “Go Away Ghost Ship.” When the Mystery Machine runs out of fuel on a creepy abandoned airfield, the teen sleuths run right into a “Spooky Space Kook.” In the final mystery, Scooby-Doo inherits big bucks from a dead millionaire. There’s a catch: our heroes must spend a night in a haunted mansion before Scooby-Doo can collect in “A Night of Fright Is No Delight.”

You can purchase DVD

UPDATE: Congratulations to Matt Coleman who won this DVD set in our contest. Thanks to everyone who played and we’ve got more contests coming!

scooby is my fave!

Those are great episodes!

I love Scooby Doo!! I still watch even though I’m almost 40.

my 10 yr old twin daughters LOVE Scooby Doo! They have a big collection of Scooby stuff. 🙂

Scooby was one of my favorites as a child. I would love to add this to my collection.

Does a box of Scooby Snacks come with the DVD? 🙂