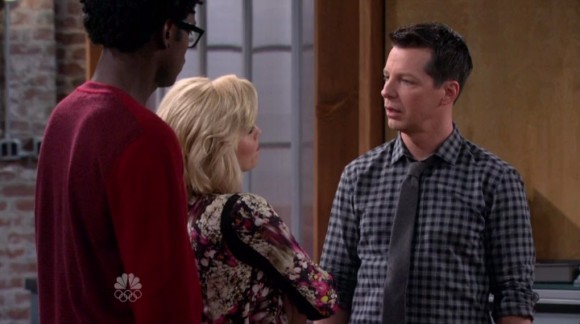 NBC has lowered the boom on their Sean Hayes sitcom. Production on Sean Saves the World has been shut down and the low-rated comedy has been cancelled.

The network had initially ordered 13 episodes and then gave the show a five episode back-order. A baker’s dozen have aired and EW reports that two others have been produced.

Sean Saves the World was already scheduled to be pre-empted this week and then Olympics coverage will take over the schedule. The network may or may not get around to releasing the remaining pair of episodes at some point after that.

The series stars Hayes as a single gay father who struggles to balance his responsibilities to his daughter and mother at home with his demanding job. The rest of the cast includes Megan Hilty, Echo Kellum, Samantha Isler, Thomas Lennon, and Linda Lavin.

Hayes tweeted about the bad news, writing, “Thanks to @SeanSavesWorld actors & crew & @NBC for a wonderful opportunity. Looking forward to Obama’s minimum wage increase to $10/hr.”

What do you think? Did you like Sean Saves the World? Are you sorry that it’s been cancelled?

It is unfortunate that this sitcom has been cancelled. This show was very funny!!! I have not seen a good sitcome in long time. Yet, other TV sitcoms that truly do not even get a giggle are still airing.

I am so sad that Sean Saves the World has been cancelled. I couldn’t wait for the Olympics to be over with so that I could get back to my favorite show on Thursday night. I loved it and so did my kids. Then to find out it has been cancelled. It needs to come back!!!!!!! You did not give them enough time! PLEASE BRING THEM BACK ON! I was telling my friends and family to watch it and now there is no show. I’m completely shocked! It’s rare that NBC gets a good show.. Why would they throw that… Read more »

I really enjoyed this show. It was refreshingly funny. I loved Linda Lavin. She looks better now than she did when she played “Alice.” There are so many crappy shows, especially the abundance of reality shows that don’t even merit mention. I wish the network would put out surveys before they abruptly cancelled shows. Shame on NBC. It’s evident that the viewers mean nothing to them.

JUST LOVED IT….MY DAUGHTER AND I COULDNT WAIT FOR IT TO AIR EVERY WEEK….GUESS NBC HAS TO MAKE ROOM FOR MORE CRIMINALS AND DEMONS…WHAT A “GRIMM” PICTURE.

I enjoyed this show immensely and will miss it! The ensemble cast was wonderful it’s too bad tgT a new edgy show with great writing and potential for a future is ended before it had a chance to take off

This was a good comedy …maybe before getting rid of the show maybe change it to a different night or different time….you networks always cancel the good shows instead of trying to change it up….why don’t you put some of these shows on Friday or Saturday nights where as us older folk has something to watch …. instead of repeats or reality shows….sorry to complain but some of that reality crap is bad!!!

I think this show was very funny my son and I watched it together and laughed the whole time. Sorry the cancelled it.

This is insane….sooo much better than Robin Williams’ outing @ the same time in my time zone. This is not more of the same…it’s new, fresh and with a superb cast. Per usual, NBC programmers are nuts.

That was the best show ever. Love Sean Hayes. I can’t believe it would be cancelled. Maybe if it was in a different time slot, not against CBS on Thursday night.

I couldn’t agree more. My son and I love this show and we are both upset it’s being cancelled. I wish this decision could be reversed. Doesn’t seem fair to lose such a great show when there is so much crap on tv.

Are you crazy? Sean Saves the World is hilarious and the cast is faboulous. Here we go again cancelling a great show and replacing it with a piece of crap! I will miss the show a lot it was just what primetime needed.

I am so aggravated. I love this show and echo the sentiments of all of you! NBC is stupid! Good shows are never even given a chance…. This is a travesty! Grrrrr! All the reality crap and sports cannot equal actual acting with humor and talent. I get tired of finding a show and next thing you know…cancelled. It’s all based on Nielsen ratings and market share that represent a tiny share of the viewing audience. It’s not even a broad sample of who watches the show. Jerks!

This show is the funniest ever. It is the next Friends or Seinfeld. I hope someone smarter than the person who cancelled it will pick the show up. This show is THE number 1 hit in my mind!

WTF?! Canceled??? I just found this show on TWC On Demand. It was hilarious! It was hilarious right from the first show. Everyone clicked, no awkward character development phase. I watched one show right after the other…LOVED it.
This gets canceled but the Crapdashians live on. Go figure.
Maybe NBC should have tried harder to find a better time slot for it instead of rushing to cancel it. Oh well, there’s always Honey Boo Boo (god I just threw up a little in my mouth).

We all loved Sean Saves the World and are disappointed to see it has been cancelled. We laughed out loud in every episode – not something I can say for many other comedy shows. NBC does it again.

Hands down this was one of the funniest shows I have seen in years! Truly, laugh out loud, hysterical. Not a show went by that I wasn’t laughing so hard I was practically crying. I don’t know why people say things like it wasn’t much better than reality tv… I honestly don’t think they could have possibly watched it! It will be missed in my household for sure.