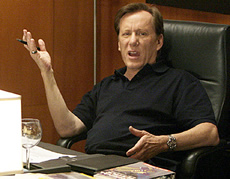 CBS has decided to cancel Shark after two seasons on the air. What killed the series?

Shark debuted on September 21, 2006 and stars James Woods as Sebastian “Shark” Stark, an arrogant and cutthroat prosecutor. The TV show did pretty well in its first season on CBS. It ranked 24th for the season with an average of 13.7 million viewers. The one downside was that the show’s viewers tended to skew older. But, in a season littered with prematurely cancelled drama series (Smith, 3 lbs., The Nine, etc.), the show’s ranking and survival was an impressive achievement. The series was renewed for a second season.

Season two kicked off on Sunday, September 23, 2007. In that 10pm timeslot, Shark had to compete against ABC’s popular Brothers & Sisters and consistently lost in total viewers and the all-important 18-49 demographic.

Like most shows, Shark’s production schedule was interrupted by the writers strike. When the strike was over, production resumed and four more episodes were created. After a long absence, new episodes began airing in late April. In the show’s new Tuesday night timeslot, it was easily beaten by ABC’s Dancing with the Stars and FOX’s Hell’s Kitchen in both total and 18-49 viewers.

The show’s chances for a third year were still up in the air until just recently. Ultimately, the combination of Shark’s inability to attract younger viewers, the writers strike, and CBS’ excitement over its new dramas is likely what led the network to cancel the series.

Woods tells the LA Times that the cast and crew were “very saddened” by the news but were trying to stay positive. He continues, “We’re a little baffled by the decision but we’re very supportive… None of us can figure out quite why. But we have no bad feelings. This show did an enormous amount for me personally. We all won doing the show.”

>The current season, cut short by the writers strike, is made up of only 16 episodes. Shark’s series finale is scheduled for Tuesday, May 20th. It’s unlikely that the episode will offer any kind of closure for the series. Stay tuned!

Shark had been on in the UK a fair few years ago. I think the problem with it was that it was to quick and intelligent for the bulk of the demographic across the pond. It is a big shame that out of all that other utter g_uff that this was the show that was cancelled. This reminds me a little of the show called “Episodes”; I’m starting to think that that is exactly how a US network works. Bring it back please, if just for us in the UK

I live in the UK. I Love Shark which is currently airing on 5 USA. James Woods is absolutely Brilliant as Sabastian Stark, cut throat and funny as a Prosecutor. This tv series Is Superior to any of the CSI programmes and really has you on the edge of your seat at times. But is not just Sebastian the Lawyer/Prosecutor, it’s Sebastian the Father, a tough role were he tries so hard and muddles through best he can. Bring back Mr S Stark, Bring back Shark. Its airing in the UK Currently, Season 1 is on DVD over here, Hello… Read more »

I really miss that show. Damm freaking strike seriously !! at least, they should sell the season 2 DVD, could be great.

watch it on fx or channel 5

Please,please.please bring back the tv show shark with James Woods it was one of my favorite evening shows my family and i enjoyed watching.why u people always take off the best of the best tv. shows all the time.Please bring it back. lynnbabe.

I love and miss this show! It was awesome! Where are they getting these statistics about the show though? No young viewers?? I was 16 when I started watching this show and i tuned in every time there was a new one. I only watched DWTS in its second season and that was bc Mario Lopez was competing! Havent tuned in since

ancel such an amazing show. More people should be made aware of its existance. Bring it back!!

I guess a lack of substance seems to sell more these days.I don’t think this is about young audiences not catching up.It just the way things are now unfortunately.Real shame.I love Woods ,I love Shark.I just pray CBS will consider bringing him back.So hard to watch anything else

Pls I love shark and I want it back badly

Ugh!!!! What is wrong with CBS?!? This was my all time favourite show! Now seconded only to Criminal Minds, I am dying for another season…. it hasn’t been that long, recast and re-air! Really! I watched every night, without fail, and I STILL can’t find the second season on dvd years later. I’m so mad at CBS….

although it’s too late…but i just watched Shark at fox crime. I never miss the show and become addicted.It’s a very great tv series…So..so sad that the production discontinued

James Wood at his best!Bring the show back .More brains than ‘Desperate housewives ‘and more drama than ‘Ugly Bretty’.

SHARK was a great show. I loved the entire cast. I love Jeri Ryan on ‘Body of Proof’ but their are plenty of actress that can take her spot.

SHARK NEEDS TO COME BACK

All of the good lawyer show’s get canceled. Highly annoyed at CBS. Australia loves SHARK.

I fully agree, Shark was a great show and James Woods was at his very best. All the other actors were equally as good and the chemistry was great as well. I tuned in every week and was very disappointed when it was canceled. Please bring Shark back, it was by far the best tv show i’d enjoyed watching in a long time.