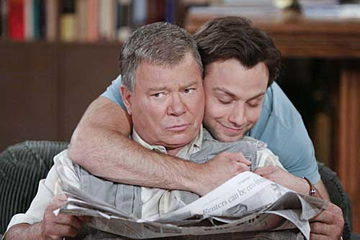 It’s been some 24 years since William Shatner played a tough cop on T.J. Hooker. The show ran from 1982 until 1985 on ABC and then from 1985 until 1986 on CBS. It was one of the many successful programs produced by Aaron Spelling.

Though he’s 79 years old and not quite in the same physical shape as he once was, Shatner recently re-enacted his T.J. Hooker trademark “slide across a car hood” for his CBS sitcom, $#*! My Dad Says. The veteran actor has starred on many TV shows but this current role is his first sitcom.

Can’t believe the networds will continue this terrible, unrealistic, degrading program and cancel a well acted and written show like Terriers!