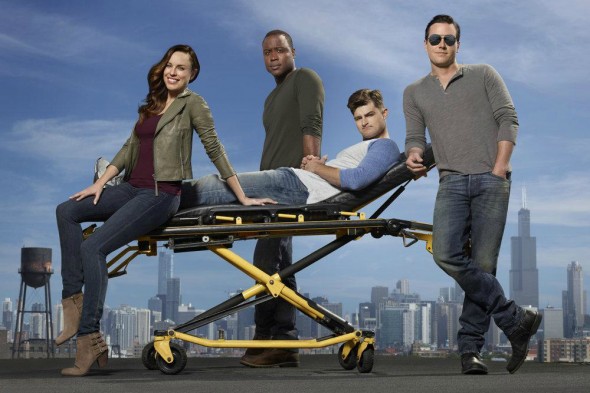 TV show description:
A dramedy, this series revolves around the work and personal lives of EMT’s who work for the Eminent Ambulance Company in Chicago.

Their sometimes silly and self-righteous (even self-destructive) personalities make them unqualified for sustaining relationships, friendships, and most occupations. Thankfully for the citizens of the windy city, they are uniquely qualified for saving anyone who winds up in their ambulance.

Theresa Kelly (Jessica McNamee) is a smart female cop with the Chicago PD who still loves her ex, Johnny. Ultimately she had to move on when he wouldn’t commit. Wide-eyed and excitable, Brian Czyk (Kevin Bigley) is a new EMT who still lives with his parents.

Series Finale:
Episode #10 — Shotgun Wedding
Getting shot in the arm during a robbery causes Theresa to assess where she is on the road to her dreams, and she doesn’t like what she sees. Afraid that her FBI talk is for real this time, Johnny proposes that they go get married. As in, today. Right now.

So with holy matrimony in their sights and Maeve and Hank sworn to secrecy as witnesses, Johnny and Theresa head down to the courthouse. Of course, the secrecy thing seems to elude Hank and Maeve, who arrive with the whole station house in tow, plus Billy. Unfortunately, the powers that be inform them about the 24-hour waiting period, but when Billy mentions that they can get married at his uncle’s church across town, the excited newlyweds-to-be take it as a good sign. And that’s when things really start to go off the rail.
First aired: April 14, 2015.

What do you think? Do you like the Sirens TV series? Do you think it should have been cancelled or renewed for a third season instead?

My husband and I just binge watched Sirens. We haven’t laughed so hard in a very long time. Why was it cancelled? How would I go about starting a campaign to get it back on the air?

How do we get this show back on air or at least get Netflix to pick it up!?! I just watched the series on Netflix and it is by far one of the best shows I’ve seen in a while! Too funny!

Please renew the series Sirens. So love this show. We need a show like this one. It’s good, clean and fun. I love the cast too!!! I hope Netflix/Fx or some other network picks this one up. It’s so worth it!!!! Praying to the Network Gods! 🙂

How did this get cancelled??? Was it too good for USA? This show was good from the start and had the potential to be great. I can’t think of any show that was funnier.

Me and my family watch the whole two seasons over the weekend couldn’t stop this by far is one of the best show that I’ve seen. I can give you a list of shows to cancel like zombies, the real o’neal, the family superstore lucifer,

stop canceling good shows!!!! Now get it back before the actors get new jobs!

Another of my favorite comedies cancelled. First ” Outsourced” and now “Sirens”. Loved this show – great cast , hilarious ! If it weren’t for “Mr. Robot” I would boycott USA Network as I have boycotted NBC .

This was a funny, real well put together TV show. I have no idea why they would have ever cancel that. It had such great potential. I can only hope that some other network picks up the TV show and they start making new episodes.