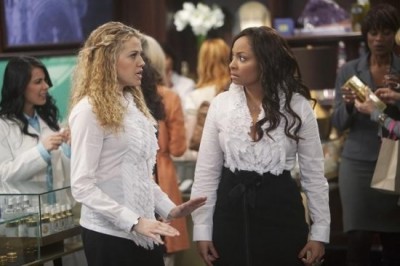 ABC Family execs have certainly been busy with the renewals and cancellations. The cable channel has renewed Make It or Break It and Switched at Birth, ordered more episodes of The Lying Game, and cancelled The Nine Lives of Chloe King. Now, they’ve cancelled sitcom State of Georgia as well.

In the TV series formerly titled The Great State of Georgia, Raven Symone stars as aspiring actress Georgia Chamberlain who leaves the south to pursue her dreams in New York City. She’s joined by Josephina “Jo” Pye (Majandra Delfino), her timid best friend and a graduate student in physics. Honey Dupree (Loretta Devine) is Georgia’s nymphomaniac aunt who offers advice and owns the apartment where they live. Recurring characters are played by Kevin Covais, Hasan Minhaj, and Jason Rogel.

State of Georgia ran for 12 episodes, between late June and mid-August of this year. The first episode attracted 1.32 million viewers but the second installment fell sharply to 807,000 — a loss of nearly 40%. Subsequent episodes did even worse and the season (now series) finale attracted just 590,000 total viewers.

Despite the poor ratings, up until a couple days ago Symone was campaigning on Twitter for a renewal. She hasn’t tweeted since the cancellation notice came down.

Co-star Delfino tweeted, “State of Georgia fans thank you so much for watching! You’ve been simply the best. You even loved the crazy hair! Speaks volume(s). teehee x”

Rogel tweeted, “single tear ;(” and Delfino responded, “Totally. We’ll just have to do our own private nerds show and gear it towards Showtime.”

What do you think? Are you sorry that State of Georgia has been cancelled? Why do you think it didn’t attract a bigger audience? What would you have liked to see happen in season two?

I watched the season on Netflix as well and I LOVED IT! I thought Raven looked amazing (so proud of her), and I really liked Jo’s character. I just didn’t understand why Netflix said that Raven’s characters ex-beau was following her in hopes to bring her back, but that’s not what happened? Oh well, I still loved it and I hope they reconsider bringing the show back.

They should really bring back State of Georgia. It was a really good show :/ llease please please bring it back :/

I just watched the first season on Netflix and I’m heartbroken to learn there is no season two! So many things left unfinished,this is why I dislike Abc most of the time. Just when you get into it they cancel it. I adore every episode and it made me laugh alot! Please please please bring it back!

Aww so sad, I just got into it from netflix. I think its hilarious and refreshing for
our generation. Found it to be a destressing change from the drama and serious
shows that are on now. Its nice to laugh out loud for a change. Farewell loved the
cast.

I honestly think it did not make it (not because of lack of talent and greatness) because of the show’s time slot. I could not stand the shows before and after State of Georgia (a great show might I add).

I wish they would do a 2nd Season. Not fair… I loved all the State of Georgia episodes. Especially the “Flavor of the week” episode. We need a That’s So Raven Movie or a State of Georgia Movie… Raven can pull it off!

I think it’s dumb for cancelled “State of Georgia” the cast was funny and especially Raven Symon’e, she my favorite and I wish Disney/ABC Family renewal a season 2 of State of Georgia.

This is a out raged. I loved that show. It more than likely would’ve regained momentom after while. Too sad. Wish I had my own network. I wonder what’s replacing it something totally lame of course. ABC idiots!

Seriously! I LOVED THAT SHOW!!! A little gutted that it was cancelled. Raven Symone is the best of the best and I grew up with her from That’s So Raven, and so on! Why the cancellation!?!? Seriously peeps, State of Georgia was what we ‘Raven Symone’ fans needed to see and now it’s over. BOOOOOO!!!!

i also saw the television show on netflix, and now i am hooked! sad that it got cancelled, love raven 🙁

Awh, man! I really liked this show!! It didn’t get many viewers because (like others have said) it was poorly advertised!!! I didn’t even know about it until after I saw it show up on my Top Ten on Netflix… I just googled season two because have watched the entire season at least 3 times. I have only seen 2 ABC shows I’ve liked ever and its only because of netflix that I’ve even watched them. They keep getting rid of everything decent and their movies are garbage! Not a fan of ABC and this is why…

I love the show I keep watching the episodes over and over…. It kinda reminds me of me and my acting career I see my self in Ravens Character minus the rich aunt… I think it didn’t last because it wasn’t given time.. I am very disappointed I was looking toward Season two and now all I have is 12 episodes on Netflix… But I will krep pushing toward my career just like GEORGIA!!!! Xo

I totally agree with you. I LOVE Raven, I’ve watched her since “That’s So Raven”. I hope she continues to make movies or shows. I loved this show gosh!