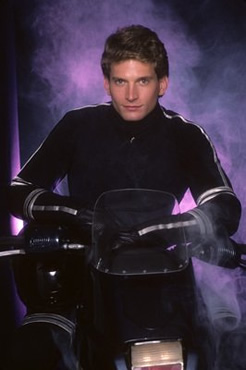 Back in 1985, ABC aired an action series called Street Hawk. The TV show revolves around public relations cop Jesse Mach (Rex Smith) who gets recruited for a top secret government project — piloting a high-tech and incredibly fast motorcycle. Norman Tuttle (Joe Regalbuto) is the cycle’s inventor and the only one who knows that Mach is actually the mysterious Street Hawk. Other recurring characters are played by Richard Venture, Jeannie Wilson, Raymond Singer, and R.J. Adams

Despite running for just one short season, Street Hawk has attracted a cult following. Smith says he still gets stopped by “men of a certain age” and thinks it’s time for a new version.

He recently told the Daily Record, “I am currently developing a script for a new re-envisioned Street Hawk along with my oldest son Brandon, called Street Hawk Resurrection.”

The actor/singer continued, “Universal Studios has shown interest in the project and I would like to ask all the fans of Street Hawk to e-mail me so that I may show the executives at Universal just what kind of support I have for a new series.”

What do you think? Is the time right for a new, updated version of Street Hawk?

Yes Yes Yes,please bring back Street Hawk,i loved this show,got the boxset on dvd,i loved the theme music,and i got so pumped up when Jesse came flying out of those doors on Street Hawk to hunt down another criminal.

I loved street hawk so when i heard i was being released on dvd i had to get it.i would love for it to be on the air again.

As a kid back in the 80’s Knight Rider & Airwolf were my 2 fav tv show, As far as I was concerned nothing could beat micheal knight or stringfellow hawk. Then I discovered Jessie Mach & Street Hawk, saying I was blown away is an understatement, the opening was great, the story lines kept me hooked, even the music was awsome, as a kid I wore out Street Hawk the movie on VHS, then suddenly there was a tv show, as quickly as it started it was over : ( I’m now 44.. I have the pilot & all… Read more »

i dunno about jesse son but that would be awesome man! Im 32 and that was my favorite show as a kid no question. I loved that super vehicle era- streethawk, knight rider, airwolf- all brilliant but the best was streethawk by far. I cant belive how much i still buzz (just like when i was a kid) about hyperthrust! the sped up streetlights were fantastic. just watching a docuentary about it now and apparently some guy bought all the streethawk bikes for $3200!!! i wish id have known!!

I had an I dea for a new series as well, but the idea I had was for the original characters to train a whole new team. I was in a sense thinking in the same manner that you were. Still if you already started the script then you must know what you want. What I was thinking is that Jessie finds another police officer with the same abilities that he had, and finds a way to recruit him for the new team, and Norman has the same situation happem to him as well. I also thought that the bike… Read more »

Just finished watching street hawk again. I can honestly say the last time i saw it was on betamax in the 80s.. I did think it wouldnt be as good as i remembered but you know what it was. I really hope you do bring it back. There are alot of guys in our thirtys now cough cough that were kids when we used to watch it and they have said to me that they would love to see it remade. Why they cancelled it i will never know. And so soon. Good news is that it is on dvd.

I know just whot you mean. My favorite is the end of the pilot. You know that part where he does the backflip with the bike. I also liked the way it seemed to roar when ever he used vertical life to just the bike over things and people. It was a little like Airwolf combined with Knight Rider. Incredible ground speed mixed with amazing airborne tricks. I also hope to see the series go farther as well.

I would really love to see the show back on… big time!!! I loved it. I have to ask if it will be coming back? It is a couple years since this post … so….

yes i would love to see another mega force remake. please keep me informed of the progress. it was my favorite show im facinated with motorcycles

I loved this show and recently found that you could get them on Netflix. When my husband (same age, same generation as me) said he had never seen the show I put all of the episodes into our queue. His comment after the first episode on disc 1– It’s very 1985ish but I’m kinda hooked, let’s watch the next one. And so, we’re about 3 episodes of being caught up with the full season. Since they’re redoing all of the old shows (see Hawaii 5-0) I think that a new Street Hawk would be a millions times better than a… Read more »

Would love to see this back on tv – It was a great show that ended too soon.

This was and still is one of my favorite shows, i had a friend from the U.S. send me a copy on dvd as it was aired on bravo tv. I never missed the show. They should do a remake as there are some younger fans of the show that have seen it and liked it. It brings back all the memories of being a child again.

One of my fav child hood shows….loved the theme song.I espc remember the blinking floor lights at the begining, and being pissed if I missed the intro lol

Thanks to Comcast, Universal Media Studios is bringing Street Hawk back in the Disney-ABC Television Group fold once more – before Rex Smith can ride the motorcycle back,
and the Alphabet Network is developing a new reimagining of the classic but ill-fated and
critically acclaimed action hour alongside Scott (Swaps, Downfall) St. John, best known to television as “The Snot.”