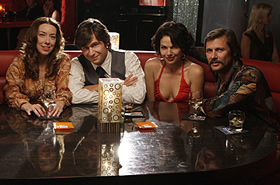 Cable channel Bravo has purchased the exclusive rights to air CBS’ summer drama, Swingtown. Does this mean there will be a second season?

CBS’ President of Entertainment, Nina Tassler, gave the drama a greenlight in May 2007 after HBO had passed on the project. It was expected to air during the regular 2007-08 season but CBS decided to delay the series until Summer, typically a time used to burn off less desirable programming. Critical and viewer reception for Swingtown was mixed and the pilot debuted to fewer than 8.6 million viewers and a 2.5/7 rating/share in the 18-49 demographic. The ratings for subsequent episodes dropped from there.

After seven episodes, CBS moved Swingtown to Friday nights and gave Flashpoint its place on Thursdays. In its new timeslot, the viewership plunged to a low of 2.82 million.

Despite the disappointing numbers, Swingtown has attracted media interest and a devoted group of viewers. The series also still must have some supporters at CBS because the network execs opted to air all 13 episodes rather than pull it.

Though the series’ ratings are too low to warrant a season two renewal on the network, the CBS studio tried to find another home for Swingtown. They focused their efforts on cable channels which aren’t under strict FCC regulations. On cable, the writers could presumably take the show’s risque exploits even further and possibly attract additional media attention. Unfortunately, there’s been no takers.

Bravo recently made a deal for the cable rights to air Swingtown’s first season in the next few months. The cable station has made it clear that they are merely purchasing the pre-existing 13 episodes and have no intention of producing a second season. The deal effectively closes the door on the series’ future. With Bravo having the air rights for the first season, another cable channel would have little reason to produce season two.

On a positive note, the first (and only) season of Swingtown will be released on DVD in December. With any luck, the executive producers will use this opportunity to answer outstanding questions and to tell us what might have happened if the series had continued. Stay tuned!

i liked the show something diff

oh, it’s very pity that was only 1 season. This show is really good. I wanna more 🙂

I LOVED THIS SHOW….please bring it back please : (

I loved this show…who needs more reality shows…we need more shows like Swingtown…feel good shows…we need escape type shows…I lived through this era…believe me it was a blast! I was so disappointed when it was cancelled…please bring it back!!! I never missed an episode…don’t understand why you can’t bring it back?

I Loved this show I was completely peeved to hear they were taking it off after only one season…………and left us all hanging!!! Rotten thing to do!!! I never missed an episode and was really looking forward to it’s return. Please reconsider and bring this awesome show back, it ‘s sounds like it had quite a following!?!?

I just don’t understand why this show was taken off!!! Everyone I talked to watched it. I wish another network would pick it up because I assure you alot of people were left wanting more…..

this is one of the greatest shows since melrose place, please dont do this to america bring it back!!!!!!!!!!!!!!!

i liked the show, it was something a little differnt. how many more reality shows must we watch?

Please bring Swingtown back. I definetly could relate to this show. Disco era, gold chains, the guys think they are so cool. I love this show.

I remember being a kid in the 70’s wondering why adults would put keys in a bowl! How silly! LOL The one night I come home from a Sat night sleepover because “Suzie” isn’t sharing her Barbies with me, and this is the “grown-up” entertainment for the evening?

PULEEEEEZ bring it back! NOW This show gave me closure!

What a fun escape back to 1976. Ah, the 70s. Sex, drugs and disco. All the actors portrayed their characters incredibly well. One of the few shows I really looked forward to and made a point not to miss if at all possible. I truly enjoyed the memories – the cars, the music, the Olympics on TV, the styles, etc. So disappointed that it was cancelled. Not surprised to see the actors on other shows now (they are all so talented) but sad that they’re not back on Swingtown. I’ve read the other comments. You had a loyal following. Too… Read more »

I loved Swingtown. Please bring it back. I am soooooo sick and tired of the hospital drama’s I could literally die and slow death. Swingtown was the best thing on tv and we need it back.

LOVED the show, I hope something more happens with the show. I heard about it from a friend, post production, watched all of it on netflix in two days. I want more!!!!

Bring it back! With so much crap on TV, that show was a welcomed change. No one can tell me The Hills or Dancing With the Stars is more entertaining.

I loved this show. Swing town was my favorite. I hate that it was cancelled. I have been waiting all year. What a let down. Please bring it back!