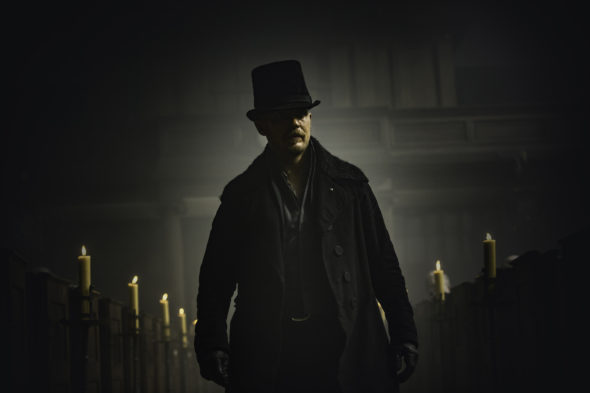 What’s next in store for Taboo? Recently, co-creator Steven Knight spoke to Deadline about the future of the FX TV series.

In the interview, Knight revealed he has plans to move the show to North America in future seasons:

Not certainly in this first eight hours, but we have plans — well, certainly I have plans — if we get given the green light for more. The plan is that there would be three seasons, and, as with Peaky Blinders, I have had a destination in mind from the beginning, because I think it helps as a writer. The destination in mind is that James Keziah Delaney sets foot on Nootka Sound. But that’s a long way off.”

Though neither FX nor BBC One have renewed the series yet, Knight says he and Hardy are ready for more seasons:

I think when we first set out on this we’d go well, eight hours we can tell the story, you know, the story — beginning, middle, and end. But I know Tom has loved it so much really, has been so involved as a producer and as an actor. I’ve enjoyed it so much that we would both be ready and willing to do Series 2 and Series 3 and see where it goes.”

What do you think? Did you watch the premiere of Taboo? Would you watch another season?

This show is so amazing, I am on the edge of my seat. He didn’t kill winter, its a set up. Please more seasons

YES !!!! more , at least 5 seasons .. as soon as I discovered ( A week late of the premier of this show) I was hooked , with only 2 episodes left I am already experiencing premature with-drawl symptoms

I am addicted to this series. It’s one of the few programs my husband and I watch together, which is a big plus for us both! Did you read that programers? Both men and women enjoy this series so please, please, please don’t cancel date night.

Pllllllllleeeeeaaaassseeee renew…..this show is fantastic, don’t know what I’ll do if it doesn’t renew, we all need some James Delaney and the whole cast.

I. ~N. E. V. E. R.~ watch TV but my husband started watching Taboo and I caught glimpses of scenes in Ep. 3 as I occasionally wandered through the living room. I became entranced. It’s like watching a crackling bonfire on a witch-cold, starry night. I was completely hypnotized and I’ve since gone back and watched it from the beginning. Thank goodness for DVR! He had recorded all the episodes. YES, please continue with more seasons. Good work!

I can’t even image that they haven’t been asked. This has been the best series on TV and I’ve watched to many. Tom Hardy is at his best and I’ve been watching him for over 15 years Yes we want more more, more. Don’t even think of leaving us hanging after only 8. Tell me who to call or write to. I’m there.

Yes, please renew for two more seasons. I am an avid viewer of good TV and this is by far the best TV show airing right now. Cannot get enough of it.

This show is doing damn good! I hope something as eclectic and noir as Taboo doesn’t end up being cut.

Loved it will watch more