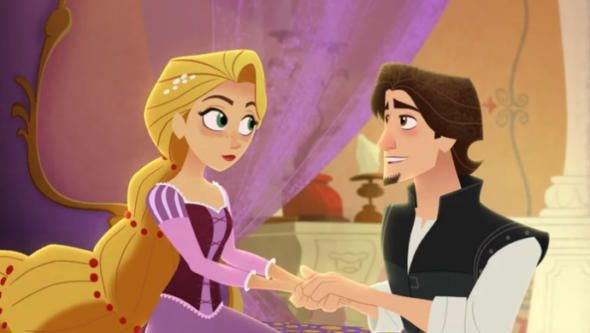 A sequel to the 2010 film, the animated show “picks up with Rapunzel acquainting herself with her parents, her kingdom and the people of Corona.” Mandy Moore and Zachary Levi will reprise their roles as the voices of Rapunzel and Eugene. The voice cast also includes Clancey Brown, Eden Espinosa, Jeff Ross, Richard Kind, Jeffrey Tambor, and Paul F. Tompkins.

Season two of Tangled: The Series premieres on Disney Channel on June 24th at 8 a.m. ET/PT.

You can read more details below:

Disney Channel has ordered a third season of the Emmy® Award-nominated animated adventure comedy “Tangled: The Series,” which will premiere its second season with the new title “Rapunzel’s Tangled Adventure,” SUNDAY, JUNE 24 (8:00 a.m., EDT/PDT), on Disney Channel, the DisneyNOW app and Disney Channel VOD. The series’ talented voice cast; including Mandy Moore and Zachary Levi as the beloved Rapunzel and Eugene, as well as Eden Espinosa, James Monroe-Iglehart and Jeremy Jordan as fan-favorites Cassandra, Lance and Varian; are set to return. The series features music by Academy Award®-winning Disney Legend Alan Menken and lyricist Glenn Slater.

In its debut season, Disney Channel’s “Tangled: The Series” was the #1 animated series on cable among Girls 9-14 and reached 40 million Total Viewers, including 8.3 million Kids 6-11 and 7.2 million Tweens 9-14. Season two finds Rapunzel venturing outside of the kingdom in search of where the mystical black rocks lead, after discovering she is somehow connected to them. Accompanying Rapunzel on her journey is her partner in life, Eugene; her best friend and confidante, Cassandra; her loyal chameleon sidekick, Pascal; no-nonsense and dutiful horse, Maximus; Eugene’s best friend, Lance and the Snuggly Duckling Pub Thugs. Together, they’ll discover new people and places and embark on an incredible new adventure far beyond Corona’s walls.

Brand extensions for the series include toys, role-play products and more from Disney Parks, Experiences and Consumer Products. New products, including a brand-new line of back-to-school items, will be available at Disney Stores beginning June 11.

What do you think? Have you seen Tangled: The Series? Are you glad it’s been renewed?

I am 11 and I LOVE VARIAN SO MUCH so do all of my friends we have been crushing on him ever since the first episode.He was in season two for like five seconds. but I literally cried I was so happy to see him again!!! Season two wasn’t that great…the first season was way better because in season two everything that was happening was kind of random…well, at least..thats my opinion. the last episode of season two was shocking. I knew Cassandra was kind of mad at Rapunzel but I never thought she would take the moon stone. I… Read more »

I am loving the series as is my daughter

Honestly, I’m probably way to old to be watching this show, nevertheless, I’m really looking forward to this coming back. The first season was done really well and I’d love to see a Varian redemption arc happen this season.