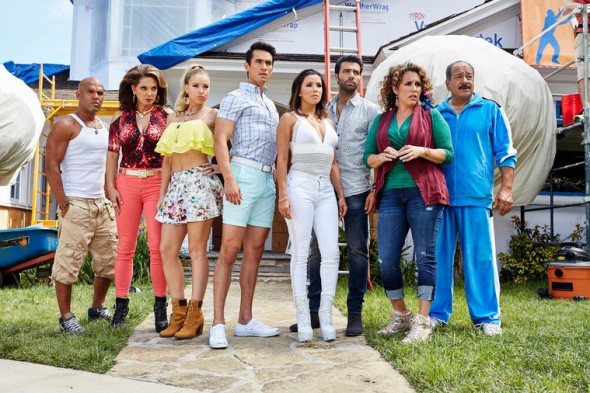 TV show description:
This workplace sitcom takes place on and off the set of a hit Spanish-language soap opera. On-screen melodrama is often eclipsed by what happens off-screen, between this dysfunctional work “family.”

Despite not speaking the language, Ana Sofia Calderon (Eva Longoria) is the star of the Spanish-language drama, Las Leyes de Pasión (The Laws of Passion). In this youth-oriented business, Ana worries her days as star are numbered.

Ana’s work life is complicated when ex-husband, Xavier Castillo (Jencarlos Canela), is cast as her character’s love interest. Ana is convinced that Xavi cheated on her — with Shakira.

Costumer Mimi Moncada (Diana Maria Riva), is Ana’s best friend. A single mom, Mimi always feels like she has too many balls in the air.

Gael Garnica (Jose Moreno Brooks) is an insecure gay actor playing Ana’s macho cop husband. A friend to Ana and Mimi, Gael thinks of his abs as job security. He rips off his shirt, whenever network suits appear on set.

Gustavo (Juan Carlos Cantu), plays the soap patriarch and father of Ana’s character. In his dotage, Gustavo is prone to nodding off, even on set.

Series Finale:
Episode #11 — The Stalker
Xavi asks Ana for a cup of coffee to talk about their relationship. When he doesn’t show, Ana fears the worst. The cast tries to impress Isaac, who is working on a script for next year’s telenovela.
First aired: February 22, 2016.

What do you think? Do you like Telenovela TV show? Do you think it should have been cancelled or renewed for a second season?

I’m so tired of networks not letting shows develop. This show showed a lot of promise for the Hispanic population who have gerown up watching telenovelas weigh their mothers. NBC you continue to miss the boat by discounting your viewing audience. Who the hell are you hiring to tell you what people are watching. I’m so tired of watching you trying to catch up and then miss the mark. Hire new people hire your audience profile.

renew it! it’s lots of fun to watch

I love it this and Superstore

Renew Telenovela, made me laugh so much, Love this show!

I LOVE Telanovela is So Funny,
Please DON’T Cancel it.
My Family, and Friends LOVE it Too.

LOVED THE LAST EPISODE, LOOK FORWARD EVERY WEEK IN WATCHING, TAKES ME AWAY FOM STRESSERS. MAKES ME LAUGH & ENJOY ENTIRE CAST! DVR IT AND WATCH IT OVER & OVER TO LAUGH.

Love this show! Funny and nice that the characters really seem like “family”

This show is so funny, it should not be cancelled!

I didn’t watch it at first, thought it was not going to be funny. I was so wrong, it is hilarious! Eva Longoria and the cast are wonderful, especially the evil actress, she reminds me of me. Hope it doesn’t get cancelled.

I’m at the point of not watching new shows since networks cancel them before people have a chance to watch them. I don’t know anybody that watches tv shows when they air. All of my friends and family watch on Hulu or DVR, at their convenience, which often times is a few weeks later. Many only like to watch shows when they can watch the the whole season without waiting so they either DVR the whole season before watching or wait until it’s available on Netflix. In today’s society most viewers 25-45 years of age are juggling work, household responsibilities… Read more »

I have no intentions of watching this one… it should have been on one of the Latino stations since they have at least a dozen.

I refuse to watch this show because she stole it from GUY ECKER and his partners. She is trash and trash gets thrown in the garbage.