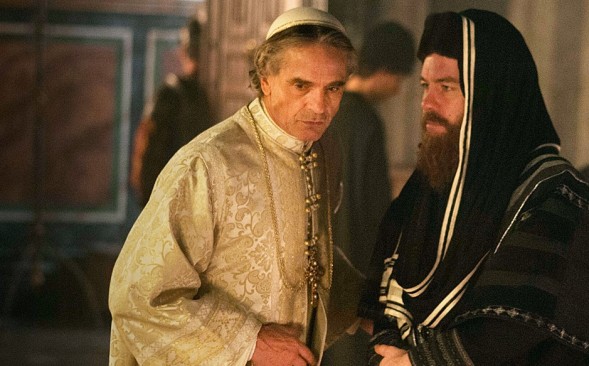 me and my hubby loved your show, was really hoping for a 4th season, I really wanted to watch more.
Great acting and great story of the Borgias family.

The Borgias was a captivating, riveting show. My husband & I are watching the series again for the 4th time and we would LOVE to see more that 3 seasons. why, why, WHY did you cancel such fine entertainment. Jeremy Irons is fabulous as is all the cast….

Wonderful show very captivating. Please Showtime – there must be a Season4!

So sorry there won’t be a 4th Season of The Borgias. Great Series.

I am really disappointed that there will not be a season 4. I feel that the last episode leaves you hanging!!! Bad way to end a great show!!

showtime-please finish the series even through a movie or another episode! you must finish what all the fans have been holding onto while invigorated each season. DONT LEAVE US HANGING!

Sadly it wasn’t a proper ending there. I believe the story deserves to be told till the end.

Just binged the entire 3 seasons…. looking for season 4…. so disappointed…. it deserves a season 4. The family still has a lot to tell! Excellent Series!

For those that want the rest of the story, I highly recommend Christopher Hibbert’s book, The Borgias and their enemies. Not a bad read for a history book. Showtime has abandoned any ideas of finishing the series.

Unfortunately the series when originally broadcast suffered from poor ratings for, in my opinion, two reasons. First and worst, it was televised at the same time as HBO’s blockbuster Game of Thrones. Secondly, the show never seemed to develop a happy compromise for the viewers tuning in for it’s historical content and what seemed an over abundance of sexual content. As a history buff I was sad to see the series canceled, but pure history shows rarely draw a large enough viewership to cover production costs. The battle scenes alone probably blew the budget on The Borgias.

What are you talking about? The Borgias was way before Game of Thrones.

I just completed Season 3. I was captivated by the story and would watch several episodes a day/night. The Borgias deserves a Season 4. Please reconsider doing a Season 4.

I just binge watched 3 seasons of The Borgias not realising there would not be a 4th. This is indeed akin to coitus interuptus. I will sorely miss Holliday Grainger, Francois Arnaud, and I was already missing Sean Harris. C’est la vie. I suppose.

My husband and I just watched all 3 Seasons of The Borgias and were so caught up in this story. It definitely deserves a 4th season. The explanation not to continue was poor. There still is a family and it was obvious at end of 3rd season the show was going to continue! Very disappointing! Please do the 4th season.

The Borgias deserves a 4th season. I can’t believe what I’m reading. No movie. Just another season. I love this show. It’s one of the best in the world.

Another great series that was simply too sophisticated for dumbed-down American tastes. Not enough car chases. (Oh yeah… 16th Century.) I think it’s irresponsible to not have closure. S3E10 did NOT sew everything up.

Neil Jordan your explanation is ludicrous this could in no way be what you intended for the ending. Most ridiculous answer I have heard. What a shame.