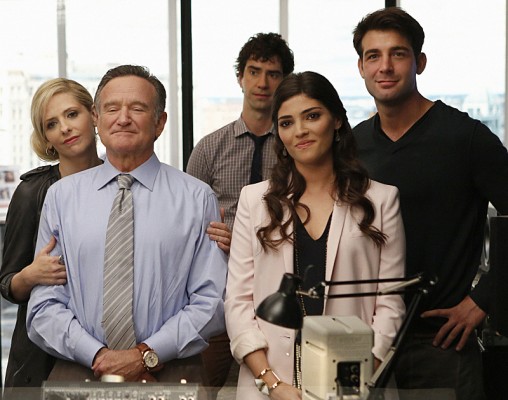 TV show description:
In this sitcom, Simon Roberts (Robin Williams) is the head of a powerful Chicago advertising agency. He’s a genius at his job and uses his unorthodox methods and unpredictable behavior to land the biggest clients and brands in the world. Even more important to him is having his daughter Sydney by his side.

Sydney (Sarah Michelle Gellar) is also Simon’s partner and his exact opposite. Eager to make a name for herself, she’s focused and organized. Unfortunately, she has to spend a lot of her time parenting her father. That would be a bigger problem if he wasn’t so brilliant at his job.

With his team and his daughter behind him, Simon continues to set the advertising world on fire.

Series Finale:
Episode #22 — “The Lighthouse”
When a corporation wants to buy out Lewis, Roberts+Roberts, Gordon calls in the board to vote, and Simon’s ex-wife and Sydney’s mom has the final say.
First aired: April 17, 2014

What do you think? Do you like The Crazy Ones TV series? Do you think it should have been cancelled or renewed for a second season?

Loved the show and the cast. Sorry to hear it was cancelled. Now there are only two shows on CBS worth watching – Good Wife and NCIS.

get rid of sarah michelle geller and it would be much better.

Great show! I think the Network executives are “The Crazy Ones” for cancelling this show!!! The entire cast is superb, which is rare! What a ridiculous waste of talent to not allow this show to move forward!!!

The show was starting to come into its own, I watched every episode. Should have let them have a second season, I have seen worse shows turn around and be very good.

Sorry to say folks, but this morning the hammer came down on The Crazy Ones and the show has OFFICIALLY been cancelled. A big thank you to Robin Williams, Sarah Michelle Gellar, James Wolk, Hamish Linklater and Amanda Setton for a truly fabulous show. Hopefully, we’ll see all of you again in the near future.

it is always sad to get this type of news. I was a big fan of the show. The characters were amazing. The writing was tremendous. And I thoroughly enjoyed it every week. The replacement shell, bad teacher, is an absolute piece of trash. I am so sorry that the network has chosen to cancel this particular show. If it wasn’t for the Big Bang Theory I might never II would say there are no good shows on your network anymore. Too bad.

At first I did not like this show even though Robin Williams and the rest of the cast are great. But after I watched the 2nd episode and started watching it every week, I really started looking forward to it every week. I am glad they have not cancelled it. There are lots of crappy shows that survive so I am glad someone showed some sense and keep this one. I was beginning to think there wasn’t anything on TV for me to watch anymore.

I LOVE this show! PLEASE do NOT cancel this show. I love the actors, the plots, the guest stars, and the genius behind it all. Do not take this one away!

This show is great!! My “new favorite”! The writing is exquisite, the acting, direction and production are perfect! I honestly do not think I can handle it if this show is cancelled….

I think this is a great show. The genius of Robin Williams is win win. He has a good support group of actor’s that have their own story to tell. This makes the show more fun to watch. Sarah Geller as his daughter tring to reine in her father and not getting done. James Wolk Hamish Linklater and Amanda Setton round out the cast with good looks and quirky pranks. The only issues I have with this show is that it needs to be on earlier.

I think that The Crazy Ones should be renewed for another season because it’s the only comedy show I think is funny.

Please don’t cancel The Crazy Ones!! It just needs to find an audience & it will. I have watched it from the beginning because of Robin Williams. He is a comedic genius!!! This show should be given every chance to succeed.

My husband & I love this show! I saw preview of bad teacher- WILL NOT WATCH THAT! Keep the good shows on.