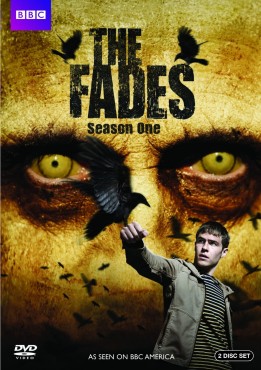 A new supernatural horror series, The Fades revolves around a young man (Iain De Caestecker) who’s haunted by apocalyptic dreams that neither his therapist nor his best friend, Mac (Daniel Kaluuya), can explain. Worse still, Paul has started seeing the Fades (the spirits of the dead) all around him.

The Fades can’t be seen, smelt, heard or touched by other humans as they’re what’s left of humans who’ve died but haven’t been accepted into Heaven. They become embittered and vengeful towards the human race and have found a way to break the barrier between the dead and the living.

The first season of The Fades has been released on DVD. The two disc set includes all six episodes as well as interviews, outtakes, deleted scens and more. You can purchase The Fades: Season One

Guidelines: This giveaway is open to participants with a United States mailing address only. (International readers can enter if they have a friend in the States who can accept their prizes by mail.) Many may enter but one person will win. You must be 18 and older to enter and no purchase is necessary. Contest ends March 4, 2012.

UPDATE: Congratulations to Julie Ross who won this DVD set in our contest. Thanks to everyone who played and we’ve got more contests coming!

I really hope I with this time!

Thanks, really love this show!

Iain De Caestecker and Daniel Kaluuya are brilliant as sci-fi/fantasy obsessed teens who suddenly find themselves heroes in a terrifying fantasy adventure. Thanks, BBC America!

I appreciate the opportunity to participate in ‘The Fades’ DVD set contest! 🙂

Thanks for the contest.