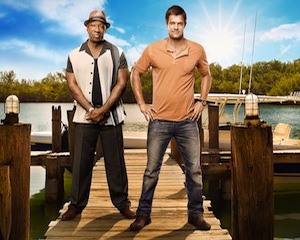 In a tribute to Michael Clarke Duncan, Bones creator Hart Hanson told THR that there were plans to bring his character and Geoff Stults’ character back to Bones this season. Their spin-off series, The Finder, was cancelled in May.

He said, “The Finder started as an episode of Bones, and we were thinking of having MCD and Geoff do one more crossover episode on Bones so that we could tell the Bones fans what happened after The Finder didn’t come back.”

“We put all that on hold when he had his heart attack in July, but we were hoping he’d be back. [Bones star] David Boreanaz directed a Finder episode, and David and MCD really bonded. They’re both team-playing, big-hearted, noisy, jock-type wonderful guys. We’re just now coming to grips with the idea that MCD is gone. I sure hope we can think of something that would do him proud.”

Hanson also notes, “When we shot that last scene of The Finder this year, we were hoping it would be the season finale, not the series finale. If I had known it would be the end of our series, the last image would have been Leo standing outside his bar, looking out at the weather vane and being the last man standing, with everyone else scattered to the wind.”

The Bones creator also said that Duncan’s part was itinially written for a “Sam Shepard type” — an old, white, and skinny cowboy. Hart said that he completely rewrote the character for Duncan and added, “A lot of actors are nothing like what you see, but MCD was very much like what you see onscreen: that big smile, that big voice, not a bit of a bully to him. He doesn’t alpha-male anybody, though he could alpha-male anyone he wanted. He was just a genuinely good guy.”

What do you think? Would you like to see The Finder wrapped on Bones? Should they still do the crossover now that Duncan is gone?

Bring back the Finder! It’s been 8 years, we need Walter!

Yes bring back the show, have only just found it and I think it’s great. Maybe leo goes off to find willow and finds true love and will comes back to tell everyone. Anyway bring the show back please.

Yes, I really liked the show. I’d love to see it wrap up. Course, I’d like a happy ending!

I Love this show… The last episode was so wrong and left so many loose ends… MCD was a major role character and gave the feeling he was what was keeping Walter going. I hate we lost such a great person. It would be so hard to feel his shoes on the show…. but I know you can find another good actor that can play a part for him… Please bring the show back… as it’s OWN show..