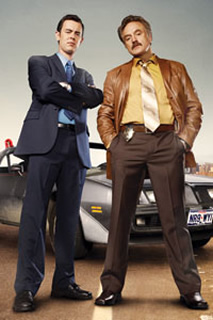 FOX has decided to wrap their summer run of The Good Guys a few weeks early, on August 2nd. The network had previously planned to air original episodes of the Bradley Whitford / Colin Hanks series until August 23rd.

The series debuted to a disappointing 1.5 rating in the 18-49 demographic and 4.93 million viewers. The numbers have essentially fallen each week and hit a low of a 1.0 rating and 3.42 million viewers.

Despite garnering poor ratings during the summer months, The Good Guys remains on the network’s fall schedule. Original episodes will return to FOX beginning Friday, September 24th. It remains to be seen how long that will last.

FOX has lower expectations for summer shows but it’s hard to believe that the network is pleased with the series’ performance. It seems that they’re keeping it on the fall schedule in hopes that viewers will tune in on Friday nights instead of trying one of the other networks’ new shows.

By the time Good Guys finishes its summer run, FOX will have aired nine original episodes. That will leave 11 new episodes for the fall. The real test will be to see if the network orders any more. Right now, that doesn’t seem likely.

What do you think? Do you like The Good Guys? Do you think it’ll last to see a second season? Should it?

I look forward to Friday nite to see the Good guys. I love Mr Mustache(Dan). I am so sick of reality shows and singing shows etc. etc. Maybe The Good Guys should be picked up by USA channel. they have lots of fun shows that leave you feeling happy you watched, just like The Good Guys Series. Don’t cancel it!

dont cancel that, i pay a high cost cable in brazil , just for see the good guys, damm it fox, when fox do something right, they cancel it…. wtf… the good guys second , third and more seasons please

love this show! why do they always either move shows around and make you play ‘find the good show’ or cancel them? the have moved Fringe and it is now up against ‘supernatural’ which no doubt has much of the same audience. it would be nice if they took into consideration the tivo-ing and dvr-ing of these shows..surely that can be tracked by now. bad moves all the way round..and really, replacing fringe with american idol! god that show really sux. keep the shows that mean something just once and dump all those stupid ‘reality’ bunkem shows..did US intelligence drop… Read more »

My family watches this show EVERY week, it has to stay on the air! Frank always said he never liked watching tv cause the shows he likes always gets canned.

I think it is a great show. Wasn’t sure about it on the first two episodes, but after that I really started looking forward to it. I know several people who also look forward to watching it. Friday night is not the best night for any show to have good ratings. But We like it and hope it returns.

I think this show is funny, I liked it. It is good to see a show that is based in another city, and not New York, Detroit, Los Angeles, and Chicago.

It was always exciting to see parts of my city that I drive around myself and see.

Keep this show on the air. if you cancel I am certain you will disappoint alot of Dallasites.

It’s the only new show out there that cracks me up! Keep them coming…look forward to it every week!

Please, please don’t cancel……looked forward to this different, witty, funny show each week. Bring it back!!!

I love this show! It is funny and entertaining, a refreshing change. I looked forward to it every Friday evening. I vote we KEEP IT, please.

love this show!! its the only program i faithfully watch.

my family loves the “good guys” . please keep them coming!!

this show needs to stay on the air

Please do not cancel The Good Guys show…This is one of the better shows on TV.
We in Texas want another season….

I think the show is full of action and provides comedy with excitement. Please let it return.

I think the show is one of the most action packed comedys there is out there .I hope fox will let it Return to give it one more chance i believe the viewers will surprise you.

dont cancel tis show it is my favorite