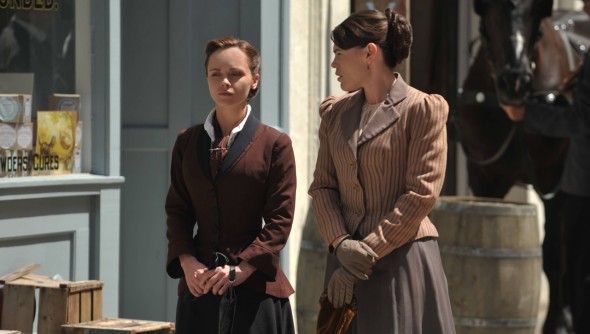 Lifetime has given Lizzie Borden the ax. The cable channel has cancelled The Lizzie Borden Chronicles after one season of eight episodes.

The limited series debuted in April and ran for eight episodes. They averaged a 0.27 rating in the 18-49 demographic with 820,000 viewers. The season (now series) finale aired on May 24th.

What do you think? Do you like this series? Should it have been cancelled? Would you have watched a second season?

“Lifetime has given Lizzie Borden the ax” lol! Great writing!

I LUV’D IT!!! CAN’T BELIEVE IT WAS CANCELLED!

After just finishing the first season on Netflix I immediately Googled the show excited to find out where and when I could expect to see season two…. I can’t even tell you how disappointed I was to read that the second season was cancelled:'( I sure hope Netflix sees the potential in picking up this show and runs with it! #hinthinthint

I’m with u Redhed31 Netflix NEEDS to pick it up. I see that their good at showing shows that has been cancelled SOOO why not pick up some of the shows like Wiches of Eastend( just to name one other that I like) where they left off. Just sayin..

Netflix should pick up where lifetime dropped the ball and rock the show for a few more seasons… I don’t care what channel it’s on as long as it’s on!

Omg this was one of my favorite shows. I even loved the music in the show and tried to find the songs on the web. Please have any network do a second series we love this show..

Yes of course I think they should have made a second season…. They are stupid not too, this makes the 4th show that I have loved & watched every week religiously cancel after its first season… I’m getting tired of this, it makes me not I want to take the time to watch any TV series anymore… For once it would be nice If they asked the loyal viewers what they wanted… But that won’t ever happen instead of valuing there loyal viewers you forget about us because all you want is more, more & more…

I absolutely love The Lizzie Borden Chronicles!!! Christina Ricci is a great actress and she held down her killer role like no other! I’m on episode 7 and just now finding out that there won’t be a seasom 2? I’m confused because the show has almost a million viewers and Lifetime cancels? That’s a very silly move. I’m highly disappointed because now we’ll never know what happens next…

Look at all the people who love this show!! Lifetime is absolutely stupid for taking it off the air. I don’t like a lot of gore and I LOVED this show!!! Bring it back!!

I loved this series, it was one of the best female villain characters I’ve seen in a long time, bring it back, Christine Ricci is the most underrated actor, bring her back

No it should NOT have been cancelled!! It was a “super good, keep you on the edge of your seat, can’t wait until the next episode” kind of show! I love Christina Ricci..she was awesome & cunning..please bring it back for another season!!!

This show was awesome…. I really was looking forward to the second season. ….. please bring it back

Why do they cancel all the good shows??…I loved this show and was waiting for it to come back on!…I’m so disappointed!

It was a great show
Sorry it’s gone

i was looking forward to the new season I loved it