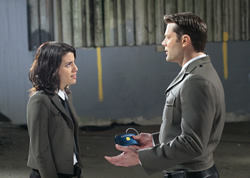 They continue w/ Kyle and cancel this…. What a load of rubbish. This is/was one of the best shows of the summer…. I waited w/ bated breath for each episode….

Wow that breaks my heart. This was one of the few shows I actually made a point of watching. I loved the character interactions and quicky, funny storylines. I really hope the shpw gets continued on another network or made into a movie a la Serenity

i really liked this show…it was quirky and funny…its a shame! i was really hoping we could get to know the middleman better and possibly see W get a boyfriend worthy of her. its a shame…abc family seems to enjoy taking all the good shows down and replacing them with crappy ones.

ABC Family sucks for letting such a good show go like that. I hope a better network picks it back up. Some people on the forums say they’re going to boycott abc family. I think i will too. Stupid piece of crap!

Natalie is a great actress!! I know her personally and know what she is capable of. Becoming Wendy Watson was just the tip of the iceburg and though the show may be over, I hope this will be the jumpstart of a great career for her and her co-stars!

I loved this show!!

Its realy sad it has been cancelled i hope the DVD sales will bring it back, if not i hope another networkpicks it up like Si-fi or some other network it was such an amazing show!!

What shame! My 8 yr old daughter really liked the show. She is very disappointed (and so am I) that there will not be a season two. There is nothing worth watching on ABC Family now.

It’s not really a surprise. The show was far, far too good for that piece of crap network.

It’s a shame ABC family was the one that picked it up. The Middleman was easily the best show I’d seen in a long time.

Kicked to the curb like Kyle XY..too bad, There’s nothing on ABC Family to interest me now…

Yet another example of a great show being screwed by a network, while endless crappy reality shows abound. Go figure!!!

a sad news…its a good show.