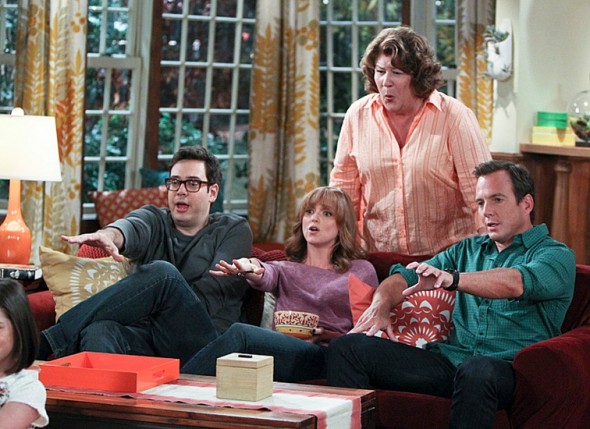 CBS has pulled the plug on one of their family comedies but it’s not the one you’d expect. They haven’t cancelled The McCarthys yet but have dropped The Millers after four airings into its second season.

Debuting last fall, The Millers aired on Thursday nights and greatly benefitted from having The Big Bang Theory as a lead-in. The comedy’s ratings were very good — but a large percentage of viewers tuned out between the two programs. It averaged a 2.6 rating in the 18-49 demographic with 10.9 million viewers.

This season, CBS moved the sitcom to Monday nights where it has 2 Broke Girls as a lead-in. Despite the addition of Sean Hayes to the cast, it’s been struggling in that timeslot and hasn’t been helping new drama Scorpion. It’s currently averaging a 1.7 rating with 7.28 million — a season-to-season decline of more than 30%.

The cast and crew of The Millers will reportedly finish filming one more episode before shutting down production. A new episode is scheduled for this Monday night but, depending on the ratings, it may be pulled after that. Reruns of The Big Bang Theory performed well in the 8:30pm timeslot before Millers returned.

CBS has the fifth season of Mike & Molly waiting in the wings but will likely wait until after the holidays to give it a proper launch.

It’s been a particularly bad season for new sitcoms thus far. Bad Judge and A to Z were cancelled on NBC while Selfie and Manhattan Love Story have been canned by ABC. Mulaney on FOX is sure to be cancelled and The McCarthys is sure to be dropped by CBS as well. Only ABC’s newbie Black-ish is doing well.

What do you think? Do you like The Millers? Do you think it should have been moved back to Thursdays?

Just Love the Millers! Please bring them back!!

This show was laugh out loud funny. If only people had given it one chance! Not many shows out there to make u laugh anymore. Just murder and mayhem!

I don’t know why we even watch anything. Seems like everything we enjoy is canceled. Bring the Miler back on and get rid of the reality shows. I guess people are going back to watch shows like Andy Griffith because you can’t keep the good shows on. My husband and I really enjoy this show. Someone do something to get the show back on Please.

I agree. I get tired of watching a show and really liking it cause I know it will be doomed to cancellation. Why watch anything. They don’t care about us, only money, money,money.

This was a hilarious comedy, why do they always cancel the best ones!

Bring back The Millers!!! The powers that be SUCK! This show was awesome!

I am shocked that this show was cancelled. Why dont the networks give a show a decent run?

Please bring back the Millers! It was so funny. It did not need Sean Hayes though. The shows last season were the best and nobody needed to be added.

I absolutely loved The Millers nd hate that ut is cancelled. I think it is far better than The McCarthys,that one is not nearly as funny. Bribg back The Millers. Myrtle Beach is another one I miss.

I loved the millers. Please bring back.

I love the Millers! Very funny show…. maybe they shouldn’t have added Sean Hayes, though. Hope it comes back.

seems like sean hayes has been a bad luck penney n reen shows he’s been in. please bring back the only smart comedy other than bg bang theory.

We loved the Millers, why it was cancelled and they continue to keep a **** like Two Broke Girls is beyond me. Good move CBS.