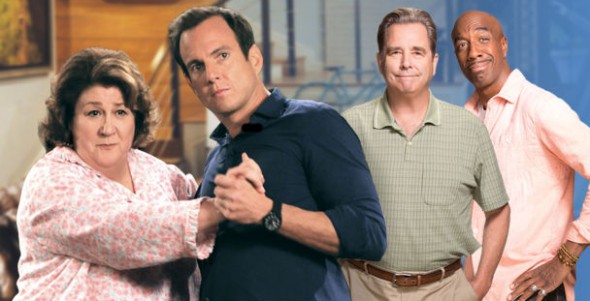 TV show description:
In this comedy series, Nathan Miller (Will Arnett) is a recent divorced local news reporter. He’s looking forward to living the life of a single man — until his parents’ marital problems unexpectedly derail his plans.

After Nathan breaks the news of his divorce to his parents — Carol (Margo Martindale) and Tom Miller (Beau Bridges) — his father is inspired to follow his lead. He stuns his family when he leaves his wife of 43 years.

Already in shock, Nathan is even more aghast when his vibrant but meddlesome mother decides to move in with him. Meanwhile, his absent-minded father decides to impose upon Nathan’s happily-married sister, Debbie (Jayma Mays), her husband Adam (Nelson Franklin), and their daughter Mikayla (Eve Moon).

Ray (JB Smoove), Nathan’s best friend and news cameraman, was excited to be Nathan’s wingman in the dating scene, but Carol manages to even cramp his style.

Now, as Nathan and his sister settle in with their truly impossible parents, they both wonder just how long the aggravating adjustment period is going to last.

Series Finale:
Episode #34 — Hero
When Nathan decides he should have a better relationship with his niece Mikayla, he agrees to use his celebrity status to help Debbie and Adam get her into a popular school. Meanwhile, when Kip develops side effects from his sleeping pills, Carol and Tom agree to help him kick the habit by sleep-training him.
First aired: July 18, 2015.

Funny show! Why do they always get rid of the good shows? Why not cancel Cristella instead.

CBS has a definite problem with cancelling sitcoms. I can’t believe some others have been on as long as they have. Is The Middle that popular? I have tried watching Cristella, but didn’t catch my interest as much as The Millers and The McCarthy’s, which also got cancelled. I don’t see the appeal of some of the other shows, like Undateable on NBC, yet that came back. CBS has to rethink their policies for cancellation.

But please don’t touch the Middle too!!

Please don’t cancel it is one of the few comedy’s that are good.

This was one of the best comedies on T.V. I don’t understand why it was canceled. The cast was great. It was really funny. I personally believe it was better than 2 broke girls and Molly. I had no idea it had been canceled, thought it was vacation. I can’t believe this show was canceled. Try again and give this show a chance. This T.V comedy was one of the best if given a chance it would have lasted for years.

This was one of my favorite shows. Don’t know why you cancel it. Need a lot more comedy shows to take your mind off of all the bad in the world…Please put back on.

I loved this show. Will Arnett & the whole cast was very funny. Why do they always cancel good shows & keep bad one’s?

Live this series…..no way it should be cancelled. ….please leave this show on the air

We really miss this show… My wife and I both thought that it was a very funny and well scripted show. It is unfortunate they CBS decided to cancel it.

I cannot believe you cancelled this show, we looked forward to it every week. I really hope they reconsider cause it was a very funny show.

The show is hysterical. Why would they cancel this. CBS has cancelled all their great comedy’s. I am so sad and disappointed.

What the hell? I just figured out that this show is cancelled!!! That is why I am getting netflix and refuse to watch any new shows. What for? the networks dont give them a fair chance. Next I suppose they will cancel The Odd couple, which is hilarious. Well, I am not getting used to that one either. My loyalty will be with netflix, so I can control my watching choices.

Made too many changes. There was no need to add Sean Hayes this season. And to feature him so prominently. I’ll miss it. Funny show.

I agree Sean Hayes did not give the show anything. This show was already good, less laughs when he was added to the cast. I’m sure they were trying to spice the show up by adding him. I found myself not as interested in the show as much.

This was a great show. I just saw Beau Brides on Blackish & said what happen to The Miller show. OMG networks do not give these show time to do well. If Seinfield was not give a 2nd & 3rd chance this show would have never made it. It ended up being a great show. What is wrong with these networks.

We really liked this show. The cast really seemed to have a good chemistry. We tend to lean towards comedies and drama shows and stay away from the reality shows.

This show was funny. With so many cop shows and reality shows on TV this was a time to really laugh. Loved all the characters. Why cancel a show that had good, clean humor.