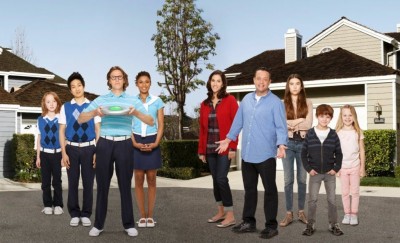 TV show description:
This sitcom revolves around an All-American family who ends up moving into a very unusual neighborhood.

Marty Weaver (Lenny Venito) just wants the best for his wife Debbie (Jami Gertz) and their three kids; Amber (Clara Mamet), Max (Max Charles), Abby (Isabella Cramp). That’s why he’s moves them to Hidden Hills — a New Jersey gated community that has its own golf course. Marty is certain that their new home will be a dream come true — until they meet the neighbors.

The residents of Hidden Hills are a little different to say the least. Larry Bird (Simon Templeman) introduces himself as the leader of the community. Then, he presents his wife, Jackie Joyner-Kersee (Toks Olagundoye) and their two sons, Dick Butkus (Ian Patrick) and Reggie Jackson (Tim Jo).

As Debbie and Marty try to make sense of their weird neighbors, they discover that the entire Hidden Hills community is comprised of aliens from the planet Zabvron. It turns out the Zabvronians have been holed up in Hidden Hills for the past 10 years, awaiting instructions from their home world. The Weavers are the first humans who have ever lived amongst them.

At first, the Weavers are ready to head for the hills but the aliens seem harmless enough. So, they decide to stay and help their new neighbors adapt to life on our confusing planet.

As the Weavers and the aliens face the struggles of everyday life together, they discover that some things — the ups and downs of marriage, the desire to be a good parent and raise a happy family — are universal. The Weavers also realize they’ve found an ally in the family next door — even if they do cry out of their ears.

Series Finale:
Episode #44 — There Goes the Neighbors’ Hood
Larry learns that he is pregnant and makes a decision about returning home or staying with the rest of the Zabvronians. Meanwhile, Reggie must also decide if he wants to stay himself or turn human, and the families see two new visitors arriving at the neighborhood (Candace Cameron and Scott Weinger reunite from Full House to guest star).
First aired: April 11, 2014.

What do you think? Do you like The Neighbors TV show? Do you think it should have been cancelled or renewed for a third season?

I really liked this show and was surprised they cancelled it, i wish Netflix or Hulu would pick up the show and bring them back.

I liked the show. Also disappointed in Last Man on Earth being canceled. Been watching a lot of Netflix and Hulu lately.

I liked the show. So it was bound to be canceled. Also disappointed that Last Man on Earth was canceled. Been watching a lot of Netflix and Hulu lately.

The show was very funny & interesting. It should have been renewed for at least one more season. It would be a good idea if a network would bring it back.

This show WAS THE FUNNIEST thing i have seen since… Well, I dont know when- OH- 3rd rock. YA o my goodness, WHY is it CANCELLED?
I find these awesome shows, get invested in them-GET MY FAMILY INVESTED IN THEM- and someone presses the CANCELLED BUTTON. WHY WHY WHY???!!! PLEASE BRING IT BACK! Who do i write?

I just finished watching the 1st 2 seasons for the 5th time. I still miss it and want to know what hole Larry Bird’s baby will come out of.

I loved this show so much. I am just heartbroken it was canceled. I was completely hooked!

We liked the show. It was different and family friendly.

Why!!!!!!!!? It was the only show I’ve seen where I love evry single person in it, it was actually magical, last show almost had me weeping. I spiraled into a pit of depression after it ended, never again will I see Larry bird or Jackie Joyner kerrsie, even dick Butkus. Why does life have to be so bleak? Why!!!!!!!!!!?

I have had that experience and the shows fell…I didn’t get that people didn’t like different, unique, how the hell are they gonna do this………….they just want the Same stuff, stuff that doesn’t rock Their boat!!!!! Damn shame it is!!! I hope you are feeling better!!!! I think life is bleak because we are at the wrong place at the right time! We just need to get out of the current place and somehow find a place that is compatible with ourselves…..nowhere near an easy task…..you should meet me, my son…lots maybe in common! btw, my son loves the night… Read more »

My daughter and I absolutely loved this show
We are very disappointed it was canceled!

I absolutely loved this show. It was so original and absolutely, outrageously funny. We all looked forward to watching this show every week. If it is within your power, please get this wonderfully funny cast of characters back together and let them continue this show

Really loved this show. Loved it and felt that the our kids could watch it. It always had a family value lesson.