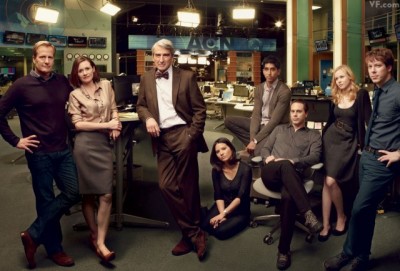 TV show description:
Created by Aaron Sorkin (The West Wing, Studio 60 on the Sunset Strip), this TV series takes a behind-the-scenes look at the people who put together a nightly cable-news show on the fictional Atlantis Cable News (ACN) channel.

The unapologetically old-school president of the news division is Charlie Skinner (Sam Waterson), a professional who learned at the feet of the legendary newsmen.

The anchor and managing editor of News Night is Will McAvoy (Jeff Daniels), a moderate Republican whose success is largely the result of never offending anyone. He’s in a lot of pain and that manifests itself in a gruff exterior when he’s off camera. His world is turned upside down when Mackenzie McHale, his new executive producer, re-enters his life.

MacKenzie (Emily Mortimer) is a highly respected news producer who was once romantically involved with Will. She returns from 26 months of reporting in Iraq and Afghanistan to executive produce News Night. She hopes to help her former flame to realize his full potential — something that he has little interest in doing.

Jim Harper (John Gallagher, Jr.) follows MacKenzie to News Night as senior producer. He served with her in Iraq and Afghanistan and she can’t live without him. Though he’s just 27, he’s more like Charlie Skinner than he is his contemporaries and has followed the news industry since he was a boy.

Margaret “Maggie” Jordan (Alison Pill) started at News Night as an intern and quickly rose to the role of associate producer. Her level of intelligence is equal to her lack of experience and lack of confidence.

The network’s financial news reporter is Sloan Sabbith (Olivia Munn), a young woman could be earning much more money as an analyst at Goldman, but her calling is economic reporting.

Neal Sampat (Dev Patel) writes Will’s blog and scours the Internet for stories and leads that others have missed. At only 21-years-old, he’s a self-made newsman and covered the London subway bombings with his camera phone.

Don Keefer (Thomas Sadoski) is the former executive producer of News Night, having taken over the show that follows it. He often butts heads with Will, mostly because they’re a lot alike. He’d love to be on the same quixotic journey as everyone else, but is a realist who understands the business and knows he’s always one ratings point away from being out of a job.

Series Finale:
Episode #25 — What Kind of Day Has It Been
As Charlie’s friends and family gather to pay their respects at his funeral, Mac finds out she’s pregnant. She shares the news with Will, who is both elated and nervous for her. He accidentally reveals her pregnancy to some of the other staff and word quickly travels.

Jim and Maggie have been together for three days, and Jim recommends Maggie for a field producer role in D.C. Maggie is thrilled about the job prospect, but is put off that Jim isn’t more ambivalent about her leaving town for it. Sloan involves herself in making sure they don’t miss another opportunity to be together.

Don and Sloan both feel responsible for Charlie’s death. Don apologizes to Charlie’s widow for what he believes was his role in bringing on the heart attack. She reveals that in every one of the fights Charlie had with the staff since Pruit took over, he was glad they stood up to him. She gives Don and Sloan matching gifts: Charlie’s bowties.

Pruit is having PR issues — one of his companies is reportedly paying female employees less money; a separate story revealed he hired models to appear at his birthday party. Leona offers him some unsolicited advice. He doesn’t have a PR problem, he has an actual problem.

Neal returns from Venezuela and sees what’s become of ACN Digital. He remotely shuts down his replacements’ computers mid-story and chews them out for ruining everything he built. They’re going to shut down the site for a week and rebuild it.

At the reception after the funeral, Will spots Charlie’s grandson playing a standing bass in the garage. He joins him on guitar and they play “That’s How I Got to Memphis,” a song Charlie introduced him to.

At Leona’s urging, Pruit promotes Mac to Charlie’s role as network president. Don wants to stay at 10 o’clock, so Jim takes over as the new executive producer at ‘News Night.’ He offers Maggie his old job as senior producer so she can stay in New York, but she still wants to pursue the field producer position in D.C. They’re going to try to make it work long distance.

Three years earlier, Charlie watched Will peddle soft news for ratings and likability. Upset that his news channel wasn’t doing the news, he sought out Mac. Fresh from Afghanistan, she spent her afternoons drinking at a bowling alley. Mac brought Jim on board, and helped facilitate Will’s rant at the panel at Northwestern.

Thinking of Charlie, the staff powers up the newsroom and gets to work. The broadcast rolls and they do the news. (courtesy HBO)
First aired: December 14, 2014.

What do you think? Do you like The Newsroom TV series? Do you think there should have been a fourth season?

I LOVE THE NEWSROOM! One of the most entertaining shows EVER!
Well done and I love the debates I trust what the Newsroom says more than Washington!

Entertained and enjoying the show. Looking forward to season 2.

Should definately continue. It is most entertaining. The series brings out each individual character to light, their challenges and emotion. As a whole, is funny and witty. The cast is brilliant.

Love this show . When will it return ?

Love this series! When will the next season be aired?? Love this show!
Bonnie

Love it!! Bring it BACK!!!
Intelligent & funny. Need more the same!

This show is one of the beswst shows on television. Great cast. Great writing. Great direction. Sam Waterson adn Jeff Daniels are amazing.

Yes, this show should continue as soon as possible, and as long as possible. Such great writing and characters. The premise of the show is pure fantasy unfortunately…truth in reporting the news has gone the way of the politician…it’s all about the money, but these people are trying to get away with telling the truth ! I love how they take actual events that have happened in the not-to-distant past as show us what really (might) have happened. With no spin, no sugar coating.

The Newsroom rapidly became one of my very favorites. The dialog is wonderful, and the premise — truth and integrity in reporting the news — is uplifting. Obviously fiction in today’s world, but we can hope!

Hopefully Newsroom will be around for those who like intelligent discourse in the TV shows they watch. Heaven knows such shows are becoming as rare as a politician with ethics and a true sense of bi-partisan cooperation. Please leave us one show that means more to our reality than any reality show.

I think Newsroom should defiantly be renewed. Intelligent show, fantastic writing and a powerful cast

This is a great show. I think it should definitely be renewed. Has it been canceled already.

Great intelligent series. Great casting. This show should be renewed.

I love this show, Jeff Daniels is excellent!!