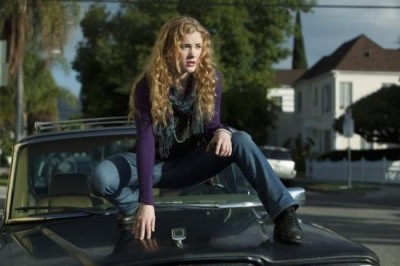 ABC Family has decided to pull the plug on their freshman drama The Nine Lives of Chloe King. The TV series lasted for 10 episodes, running from June 14th until August 16th.

The Nine Lives of Chloe King debuted to 2.2 million viewers and was cable’s fourth-highest rated show amoung females 12-34. Unfortunately, over the course of the season, audience interest waned and the season (now series) finale attracted a little more than one million viewers. It was the least-watched summer series on ABC Family.

Based on a series of books by Liz Braswell, the TV series revolves around a teenager named Chloe King (Skyler Samuels) who discovers that she is the descendant of an ancient race with cat-like heightened abilities.

The last episode aired on August 16th and unfortunately left storylines unresolved. On the positive side, for fans who haven’t had enough, Braswell has written three books in the series and there’s likely to be more.

What do you think? Are you sorry to hear that Chloe King has been cancelled and won’t be back for a second season? How would you have ended the series?

I loved Nine Lives of Chloe King. First episode and I was hooked. I loved the ending don’t get me wrong I like Brian but I Love Alek. When Brian died it mad me happy, so now Chloe can be with Alek. To be completely honest I probably would have stopped watching the show if they do a second season if Brian is still alive and Chloe and Alek are not together. And Alek being with Amy that sucks, he cant kiss her she will die. I know Amy liked Alek but she likes Paul they should stay together too.… Read more »

I really enjoyed Chloe King and thought it had a lot of potential. It had the best season finale that I had seen in a long time, something that made me want to see the next installment. I am really disappointed that we did not get the questions answered that were left. I find it hard to believe that it did not do well in the ratings, but I am biased because I enjoyed it immensely. I wonder if it would have done better on Syfy or a channel that catered to more of a supernatural audience. Out of all… Read more »

Really disappointed to hear the show was cancelled. We really enjoyed it and kept waiting to hear when a new season would start. Left so many unanswered question. So few shows are on that a family can watch together. This one gets cancelled and so much garbage stays on! I will never understand!!

i have to agree with most of the people on here i love this show and my child as well it is hard to fine show we both agree on and this is one we do agree on to watch together. we will miss this show.

Caught the series on Netflix and found it to be fairly light and entertaining with realistically defined characters who are nicely flawed with exception of Chloe, who remains sweet, strong and wise beyond her years. And then there is the romantic chemistry. To bad the series ended and worse yet that it ended like a rendition of King Lear, with a stage littered with bodies.

I am seriously disappointed that Chloe will not be back. My daughter is 13 and doesn’t have much programming on television marketed directly for her. We even bought a Chloe King book to complete the experience. We hope that another network like SyFy or USA pick it up. Or a movie is made that can resolve all the unanswered questions.

I love him too..I want him and Chloe to be together

really disapointed this series is ending. My husband and our 2 grown children were really attached to Chloe and the story…

I too watched this on NetFlix with my two daughters and love it! We are very sad to see it end. Hoping another network picks it up for it is such a good show :-).

I watched this on netflix and really enjoyed it. I don’t watch abc family so I didn’t know about it until I found it on Netflix. I really hope another network will pick it up.

I found this series on Netflix, and my son and I really enjoy it. I do not watch ABC Family hardly ever, unless there is some movie on there. I do not watch any of the series because while it says “family” most of the shows are not really family geared. I definitely will not be watching anything on ABC family. Hopefully, this series will be picked up by another network.

I loved this show. My schedule means I watch everything via Hulu or Netflix instead of live, but my daughter & I became addicted after 1 show and eagerly waited the next one being released. I think it managed to capture some of the same feel as the first few seasons of Buffy:TVS? anyway, we watched the “summer finale” and I went online to see when we would be put out of the misery the cliffhanger caused…. and immediately discovered that it had been cancelled. My daughter cried. I seriously considered it. the only good point is I can now… Read more »

I also loved the show. I DVR all my shows, so I don’t know how that count those. Secret life should be cancelled, that show is so boring now. I would have thought this one would have beat out switched at birth.. You should bring it back. Pretty Little Liars is my favorite on the channel, and I am above your target aged group.

I love this show and miss it so much! Cant believe they cancelled, ugh.