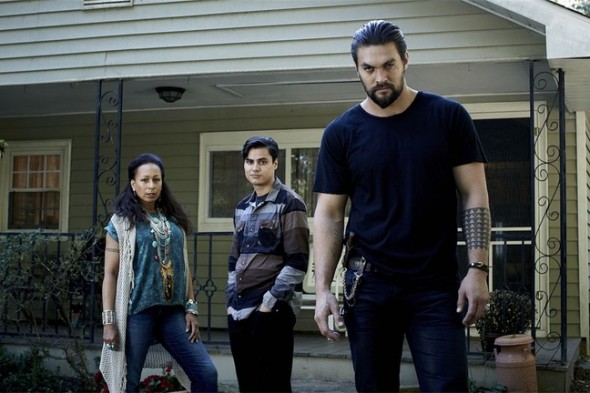 SundanceTV has renewed their original scripted series, The Red Road, for a second season. There will be six episodes once again.

Drama Starring Jason Momoa, Julianne Nicholson and Martin Henderson to Return in 2015
NEW YORK – April 28, 2013 – SundanceTV announced today the renewal of the network’s second wholly owned original scripted series “The Red Road.” The tense drama revolves around two clashing communities – a small town and the neighboring mountains, home to a Native America tribe – and two dynamic men on a collision course – played by Jason Momoa and Martin Henderson. It will return for another six episodes in 2015.

Sarah Barnett, SundanceTV President, stated, “’The Red Road’ tells the tale of a shocking conflict which plays out in a very specific place – the land that the Native Americans live on literally oozes danger. It’s a show about what happens when you try to bury the truth, and the devastating impact of that. We’re proud of this tremendously talented cast and can’t wait to see where creator Aaron Guzikowski takes this story in season two.”

Today’s news underscores SundanceTV’s commitment to the expansion of its original scripted programming slate. The network has a robust lineup of upcoming scripted originals including the second season of critical hit “Rectify” from the producers of “Breaking Bad” which will premiere on June 19th. Its highly anticipated original mini-series, “The Honorable Woman” starring Maggie Gyllenhaal, will premiere later this summer, and recently announced “One Child” will premiere in 2014.

What do you think? Do you like this Sundance series? Will you be watching season two?

Very happy to hear that this amazing show is coming back for a 2nd season. Cheerz to Sundance.

I’m very happy to see the red road is coming back for a second season, but it bites that is only for six episodes. If sundance doesn’t want red road send it to another station that would do more with that series and would get better viewers and guarantee better ratings because of what this series brings to the table.

Why 6 episodes? You want a TV show to be well received? Give us more than six episodes a year! Jeez! Now you are going to give us six more after waiting an other year; even after good reviews? Oh, thanks for nothing. I will check back on this show when you decide to spend some money and make it work. Six episodes…..get in it or get out of it Sundance!

I am very happy to hear that Red Road is coming back. I LOVE THIS SHOW. Finally something worth watching!!!

My husband and I watched this for the first season. Absolutely loved it. Glad to hear a second season is coming on. Can’t wait. Tell us when!!!!

As with Vikings and others, the bad news is such a long wait between returns. The good news is the shows return. Eventually. So many truly amazingly good new shows now, hard to believe after years of crap.

What bonehead thought it best to wait so long for season 2? Then to top it off only six episodes. If the integrity of the show would suffer as a result in earlier air date & more episodes then I stand corrected.

Seriously though….. step on it…. waiting patiently but not really

What ??!! Season two in 2015??? Ekesa! (Lenape: For Shame!) I am very disappointed, but will watch when it finally does come back. Well, at least there’s time to hire an actor (I suggest Rick Mora) to play the role of a positive male role model on the show. A good man is sorely needed on a show that features thugs, killers and drug dealers.

I will definitely be watching the new series. I have been looking for it since the last one went off. Love it. Would like to see it run continuously for a long time.

This show is awesome. All the actors portray their characters to the inth degree. This show depicts life’s unknown tragedies to the US Indian cultures that aren’t discussed on Dateline or 20/20. Just more ‘secrets’ Big Brother won’t divulge to the public.

I have been waiting for the new season. I’m very excited to see it come back. Just wish there would be more episodes.

Bravo Sundance! I applaud you…well worth the wait. So “Mambee Pambee” of that other…not to be even named of WHOM EVER was involved in this decesion.

I’m very happy to see that Sundance has given The Red Road a second season. While I definitely wish it would be airing some time this year, I will most certainly stick with the show and watch when it returns in 2015. I will admit that I’m not sure the decision to wait so long to air six more episodes will be good for the show. After all that time, some fans might think it was cancelled and forget about the show entirely. I sure hope that doesn’t happen as I’d like to see The Red Road get a chance… Read more »

I definitely agree with Jennifer’s comment wholeheartedly. I really liked watching this series, but was disappointed at the # of episodes in the first season and now to find out I have to wait a year for only 6 more episodes! Truly someone needs to start rethinking that issue at Sundance!

i really liked the story… Show, but someone is crazy if they think waiting a year to watch 6 more episodes is interesting. Its panned in my show book.