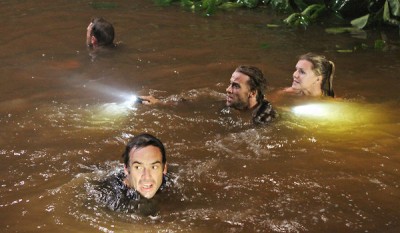 ABC continues to try to replace some of their aging hour-long TV series. Once Upon a Time will be renewed but how about The River? Cancelled after one short season?

The River revolves around the search for beloved TV host and explorer Doctor Emmet Cole (Bruce Greenwood) some six months after he and his team went missing down the Amazon. His wife, son, their crew and a documentary team go after them on a rescue mission. As you might expect, they find more than they expected and the trip is fraught with danger. The cast includes Joe Anderson, Leslie Hope, Eloise Mumford, Paul Blackthorne, Thomas Kretschmann, Daniel Zacapa, Shaun Parkes, and Paulina Gaitan.

The paranormal/horror series got a double-episode launch on Tuesday, February 7th. The first hour averaged a 2.6 rating in the 18-49 demographic with 8.35 million total viewers. The second hour drew a 2.3 demo rating with 6.83 million. Those demo numbers were better than what Body of Proof’s been getting but were still disappointing.

Looking at the half-hour breakdowns, you can see that the ratings steadily declined as the two hours progressed. Between the first half hour and the last, The River lost 15% in the demo and 26% in total viewership. That certainly wasn’t a good indication that those people would return for week two.

And, they didn’t. For the third episode, The River’s demo fell a whopping 26% with a 1.7 rating with 4.96 million. Several shows also saw declines that night but The River was easily the biggest loser of the evening.

After just three installments, The River averages a 2.0 in the coveted demo and 5.9 million viewers. It ranks 12th on the list of ABC scripted shows for this season, just above already-cancelled sitcom Man Up!. The River also receives a “D+” on the ABC network report card. Unless the next episode attracts at least a 2.0 rating, the season average and grade will drop even further.

Based on this early performance, it looks certain that The River will be cancelled after one season. The network only ordered eight episodes so there are only five produced installments remaining. The last is expected to air on March 20th. Given that this is an ongoing mystery series, it seems highly unlikely that the story will be wrapped up by the finale.

But, what do you think? Have you been enjoying The River? Do you think it deserves to be cancelled or get a renewal for season two? Cancel or keep it?

i watch the river since the beggining and is not fair,me and my family watch it every tuesday, my kids love it so as my husband and I. we want season 2 !!!!

To all out there How do you think this show should end next season if it comes Back??? It will end the same way or they will Die and the Tapes will float in the River, then you will see a hand come from off screen and pick up the water proof bag with all the tapes and the then the screen will Stop and the Credits will roll. How else can this End. I feel this Ended well for a slow starting show. This show would have gone on if the first 6 hours were as good as the… Read more »

The River Ended just Fine. There Lost in a (Magic Place) this is what the Dr. was looking for and He Found it, good for him.

I’m hoping and wishing that ABC keeps The River. If they do decide to cancel the show I’m hoping TBS, FX, or USA are willing to pick up the series. TBS could show the River instead of showing marathons of Big Bang and Family Guy.

I hate scary stuff but I decided to watch this and thought it was awesome dont cancel!!!!

please don’t cancell it~~~
I will be so disappoint if there is no season 2
keep it…….

Man the River has taken paranormal TV series further than any I have ever seen!!!! I would love to keep it around.

DO NOT Cancel The River! More publicity will bring in more people I have barely even seen a Billboard. Need to keep this show for the sake of us viewers who need something GOOD to watch!

ABC, please consider giving it a second season and different day and time. This show has the potential to be the next Lost if it can find the right night and time. I enjoyed that each episode played as a continuation but also could stand on its own merits as it dealt with a different scary supernatural issue each week. For those of us who did enjoy season 1, please at least consider a two hour wrap up episode. It is hard to want to invest time in any new series like this if there is never a commitment to… Read more »

Encore encore!!! This show deserves a second season.. People don’t know what they’ve been missing! Only show like it out there!!

please, please, please keep The River its amazing! My family and I watch it every tuesday and we are completly drawn in! It defiantly needs a season 2!!!

I totally was drug in by the suspense it gave us. Please don’t cancel it, it is the only show I have looked forward to each week during it’s run.