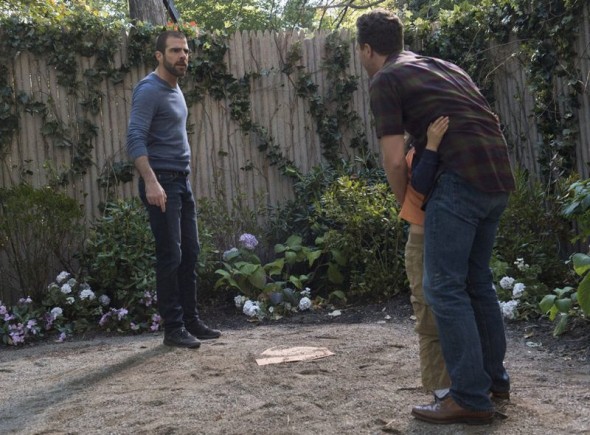 I really enjoy “The Slap.” The acting is excellent and I eagerly await each episode. I imagine people don’t know about it. If they did, I think the audience would be larger. It is better than most shows on TV today.

I like it and don’t like it. I think the parents of the unruly, undisciplined child should have been slapped instead of the child. The poor child needs therapy and his parents need parenting classes! I also find it very puzzling that no one has commented (that I’ve read) that the mother is still breast feeding her 5 year (slapped) child. I’m hoping in the end the jerk guy who slapped the child, hits his wife and bullies his son gets more than slapped before the show ends. One last comment, I haven’t read that Hector has a strong resemblance… Read more »

i love the Slap.. Such a well written and directed show. I would hate to see it pulled.

I am hoping that “The Slap” gets the recognition it deserves. I have watched all three episodes just today, and am anxious for the fourth episode tonight. I think it is smart, interesting, relevant, and am actually surprised it’s on a major network and not cable.
I think it’s problem is it’s timeslot. Thursday night happens to be the best night of TV and it’s up against stiff competition at it’s same time.. Move it to Friday or Saturday when there is absolutely nothing worth watching, and give it a chance.

I just watched all 3 episodes and I am hooked!!!! The acting is amazing with the exception of the girl who plays Aisha’s assistant. She’s awkward and just terrible. But the story lines are intense. Can’t wait for the next episode.

I love THE SLAP. I wait eagerly for each episode.

I haven’t seen the show, and wanted to see this, but didn’t realize this came on with Grey’s Anatomy and American Idol; two established and well liked shows. The Slap should air with less popular shows in primetime to give it a fair chance. I plan to watch it online because the previews look good, but a lot of new shows don’t stand a fair chance against already established and high rated prime time shows even with high profile actors and actresses.

I love to hate this show . Not really hate the show but the people on it. Hugo is a huge brat. His mother is to blame for everything! Stop breastfeeding and spend more time on discipline!

I think this is a very good show so far that shows how people handle things and how parents raise children I think it needs to stay I watched every episode and can’t wait for the next one keep it to many shows are canceled before they have a chance and the actors on this show are great and perfect for the parts they play.

This is a vet good show with an interesting, multi-faceted storyline and great characters. Unfortunately, people don’t seem to want an intelligent and different type of television show. I see no reason for the show to continue past the original intended 8 shows, but I hope we get to see the entire 8 episodes. Then we can go back to the same ole same ole!

I like it. It’s grown up television. Keep it.

Get rid of the ‘The Slap’ – and bring back Dracula!!! Honestly who are these people at NBC that are making these decisions? They should seriously be discontinued at NBC as well.

I in hopes of the show is still on please

Please keep this show on the air! Its excellent. Give it a chance for God sake’s.