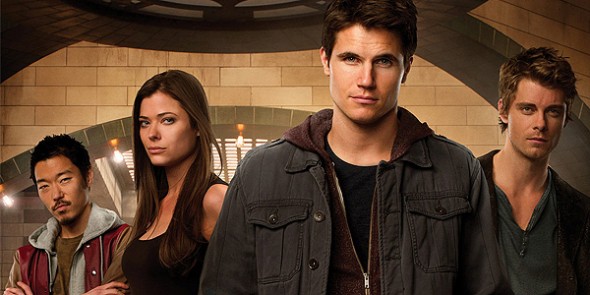 The CW is starting over on Monday nights. They’ve cancelled both Star-Crossed and The Tomorrow People after one season apiece.

On The Tomorrow People, a teenager (Robbie Amell) discovers that he has paranormal abilities. He also learns that others like him have gone into hiding because they’re being hunted by a paramilitary group of scientists known as Ultra. The rest of the cast includes Luke Mitchell, Peyton List, Aaron Yoo, Mark Pellegrino, and Madeleine Mantock.

The drama debuted back in October and aired on Wednesday nights, paired with the network’s popular Arrow series. It performed well in the beginning but the ratings fell over the course of the season, dropping as low as a 0.4 rating in the 18-49 demographic and 1.24 million viewers.

The season (now series) finale, which aired this week, left plenty of story opportunities for a second season but it won’t be happening.

What do you think? Are you sorry that there won’t be a second season of The Tomorrow People? Do you think it should have been cancelled?

I do have an idea for CW like the tv show unforgettable make this wonderful tv show ( the tomorrow people ) as a short season show also. this is not fair for us who love this show to get cancel.

Don’t cancel the show! I love this show, I haven’t been excited to watch a show since Kyle XY

Well….what can i say? It seems that every time a find a tv show that i really like somehow it gets cancelled. In my opinion it was one of the best tv series i have seen and apart from being disappointed by their decision to cancel the show, i hope that someday they will give it a second chance.

this show is amazing don’t cancel it!!!

I am sorry to hear that “The Tomorrow People” has been cancelled. I enjoyed it quite a bit and felt it was a far superior show in content than “Arrow”, which seems to dish out a never ending swirl of violence with sudden twists in the plot-line that are never backed up by any history (ie: Laurel is suddenly a drug addict; Sarah suddenly decides to leave the Arrow group).

I was obsessed with THE TOMORROW PEOPLE! It was my favorite! I can”t believe!!!
Rio de Janeiro-Brazil

Really cw ?!
One of my favorites …….again?
This show is awesome and it has a lot of potential for another season….
You really need to stop doing that !!!!

What!? Thats ****!! It was a great show! God I hate it when they cancel these shows, TTP was just so full of drama action and suspense…..i think they should just move channel, try and find another channel to pick it up for a second season! Please! They cancelled too many of my favourite shows in the past like Firefly, Birds of Prey, Legend of the Seeker, The Cape, please for gods sake….renew TTP!!!!

It was a different, great, funny and emotional show. the fact that the cw network has cancelled it,it just breaks my heart. it shouldnt have been cancelled. now everyone who loves TTP has a very big hatred toward the CW Network.

THE TOMORROW PEOPLE MUST CONTINUE!

Are you serious!!! I was looking forward to the second season!!! I need to know what happens to john!!!…seriously!!!! This sucks!!! I was obsessed with that show! It was my favorite! !!! Come on!!!!

Again, another great show not given a chance to find its footing. Not only am I ticked about 2 of my favorite shows this season being cancelled, but I don’t even get any closure from them. I’m done with the CW.

I just started watching this show in the last three episodes and found it bearable. I would have liked a second season.