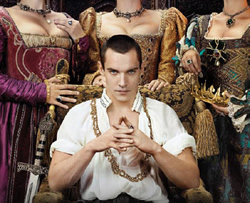 There’s good news and bad news for fans of The Tudors TV series. Showtime has announced that they’re renewing it for a fourth season but it will be the historically-based show’s last.

When the show debuted on April 1, 2007 to 870,000 viewers, it was reportedly Showtime’s best premiere in three years. The series has held onto those numbers pretty well, attracting 726,000 for its third season premiere last week. The series has also been well-reviewed but it is an expensive epic to produce.

The first two seasons totaled 20 episodes while season three will have only eight. Series creator and executive producer Michael Hirst explained to reporters in January that the reason was “The collapse of the dollar.” At the time, Hirst said that he and the other producers were hoping to be able to make the fourth season a full 10 episode season and apparently they’ve been successful.

The fourth and final season of Tudors will revolve around Henry’s final descent into madness as well as his tumultuous relationships with his last two wives, Catherine Howard and Catherine Parr. Production is expected to begin in June in Dublin, Ireland but viewers of the period drama will have to wait until Spring 2010 to see them.

Robert Greenblatt, Showtime’s President of Entertainment, said, “I’m thrilled to complete the saga of Henry VIII as reconceived by Michael Hirst. He and Jonathan Rhys Meyers have breathed new life into the costume drama by making it both modern in sensibility but also faithful to history. I think we proved that even after 500 years this is a great story.”

By the end of the series’ run, Hirst will have single-handedly written all 38 episodes. Though the events of Henry’s life are part of the history books, it’ll be interesting to see how Hirst, with his unique take on the saga, brings it to a close.

I just got addicted to the show and now seeing there’s no season five really kills me! I was so looking forward to Queen Mary’s reign. what’s another good show for me to watch now!?

I am hoping that there will be other series , especially Elizabeth 1st.

PLEASE BRING IT BACK! THERE IS STILL SO MUCH OPPORTUNITY FOR MANY MORE SEASONS! There’s prince Edward and Mary and Elizabeth! I know Jonathan Myers doesn’t want to do it anymore but once the king is dead! PLEASE WE NEED MORE!