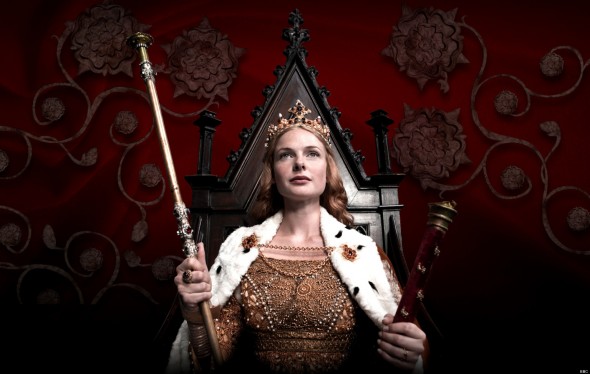 TV show description:
This historical drama takes place in 1464 England, before the Tudor dynasty ruled the country. War has been ravaging throughout the land over who is the rightful King of England. It is a bitter dispute between two sides of the same family, The House of York and The House of Lancaster.

The story is told through the perspectives of three different, yet equally relentless women — Elizabeth Woodville, Margaret Beaufort, and Anne Neville. They all use their skills in pursuit of the English throne.

King Edward IV (Max Irons) is the young monarch from the House of York who deposed the Lancastrian Henry VI. He’s crowned King of England with the help of master manipulator Lord Warwick (James Frain), otherwise known as “The Kingmaker.” Edward is always trying to do what’s right for the country, himself, and his family. He is a strong leader and fierce soldier on the battlefield yet his trusting and forgiving nature can lead to his downfall.

When Edward falls in love with Elizabeth Woodville, Warwick’s plan to control the throne comes crashing down. Incensed by the loss of Edward’s ear, Warwick vows to have him replaced — even if it means using his daughters for his nefarious scheme.

Elizabeth Woodville (Rebecca Ferguson) is a young commoner from the House of Lancaster with angelic beauty and high intellect. She becomes widowed when her first husband is killed in a battle. Elizabeth is left to fend for herself with two young boys — until fate introduces her to the noble King Edward IV from the House of York. They fall madly in love and, after a secret wedding, she becomes Queen of England. At the outset of their lives together, Elizabeth’s motives are pure, but once she finds herself on the throne, she sees the dangerous forces surrounding her in perilous politics of the day and becomes fiercely protective of her family.

The mother of Elizabeth, Jacquetta Woodville (Janet McTeer) is brilliantly sharp and manipulative. Her keen insight into court-life is the acumen that propels her daughter into power. Having already established herself as a leading lady in the court of Margaret d’Anjou (the former Queen of England), Jacquetta is no stranger to the perilous climb to the throne.

Anthony Rivers (Ben Lamb) is the brother of Elizabeth, and the eldest son of their parents Richard Woodville and Jacquetta. Anthony is protective of his sister and his family, and the only man at court whom Elizabeth can fully trust. Though he is a noble man, he will stop at nothing to keep his sister on the throne.

Margaret Beaufort (Amanda Hale) is a loyal Lancastrian, and a cousin to the deposed King Henry VI. She suffered a difficult childhood, being raised by a loveless and vindictive mother, Lady Beauchamp. In her darkest hour she turned to God for comfort. She now believes she has been sent a sign that her young son, Henry Tudor, is destined to be King. Margaret’s terrifying determination to see her son take the throne borders on madness and she is willing to lay down her own life, or even kill, for what what she believes is destiny.

Jasper Tudor (Tom McKay), the second son of Owen Tudor and Catherine of Valois, is a diehard Lancastrian, and extremely loyal to his roots. When his elder brother Edward died, he swore to protect Margaret of Beaufort, Edward’s wife, and her young son Henry Tudor. Jasper is very close to his sister-in-law Margaret. Many suspect that their relationship reaches far beyond friendship.

The brothers of King Edward IV are Richard (Aneurin Barnard), the Duke of Gloucester, and George (David Oakes), the Duke of Clarence. Youngest brother Richard is trustworthy, honorable, and an ambitious man who’s also a highly regarded military commander. He’s fiercely loyal to Edward while George is hungry to take the title of King at the first opportunity. He’s a ruthlessly ambitious man who deeply resents the power his brother possesses.

The timid daughter of Lord Warwick, Anne Neville (Faye Marsay) has dreamed of the royal life. As she’s grown older, Anne has begun to understand the danger that wearing the crown presents. Those who possess it must always guard themselves against those trying to take it. And those who want their hands on it will lie, cheat and kill to make it happen. Anne is not sure if constantly living in fear is the life she wants to lead.

Anne’s sister is Isabel Neville (Eleanor Tomlinson), the eldest daughter of Lord Warwick. She’s a strong-willed girl who shares her father’s powers of manipulation. She knows that her primary duty is to marry well, ensuring the safety and security of her family. This results in Isabel sacrificing her own happiness to wed George in an arranged marriage and a loveless union.

Series Finale:
Episode #10 — The Final Battle
Henry Tudor begins to recruit an army of French convicts. Richard III remains confident that his reign is unthreatened provided that Lord Stanley is on his side.

Following the death of his only son and heir, Richard casts his barren wife Anne aside in favour of his niece, Elizabeth of York. Anne demands that Elizabeth be referred to as “the bastard Elizabeth” but this decree is ignored. An embittered Anne dies of tuberculosis.

Elizabeth’s mother is angered by events and warns of the curse they cast on Prince Edward’s killers — that his children and their children will be struck down prematurely. This could include the young Elizabeth’s children should she marry Richard.

Lady Margaret Beaufort is equally angered by Elizabeth’s flirtations with King Richard, who has been promised to Henry Tudor once he regains the throne for the House of Lancaster. Margaret is also frustrated at being held under house arrest by her husband Lord Stanley, who she perceives to be against her son.

As Henry Tudor crosses the Channel with his raggedy army, a solar eclipse signals to all that a change is coming. Richard knows that his throne is at stake and Margaret sees the sign as a message from God that Henry must become king. She defies her house arrest to ride to Bosworth field where she pleads with Stanley to fight against the king. He refuses to state which side he will declare for.

Henry Tudor arrives and the battle commences at Bosworth. Tudor is clearly outmatched by the king’s forces — until Stanley finally declares in favour of Tudor. Stanley’s men slay Richard.

As Stanley kneels to offer Henry the crown, Beaufort declares herself “Margaret Regina,” ordering her husband to remain kneeling before the mother of the king.
First aired: October 19, 2013.

What do you think? Do you like The White Queen TV series? Do you think it should be cancelled or renewed for another season?

I can’t believe this series is going to be cancelled! I love the White Queen. Please don’t cancel, it is one of the best series I’ve seen so far, and I’ve seen many.

Please don’t cancel this show! I enjoyed the books and the series is one of the few that is as good as the books.

I love this show. Please don’t cancel it!

I am really enjoying this series, having read The Red Queen, The White Queen, The Lady of the Rivers; just to name a few of Philippa Gregory’s novels. The acting is top notch, and the story line is true to the novels.

My husband and I love this series and hope it will be renewed.

Much of the history in these novels is basically true. I have read several accounts of the events in other sources. Philippa Gregory says in her notes that she, basically, followed the most lurid accounts to tell her stories. (The White Princess: The idea that Henry VIII did not have a viable son because his grandmother, Margaret Beaufort, was under a curse for murdering, or responsible for the deaths of, the adolescent Edward Prince of Wales and his brother Prince Richard when he was a child is ludicrous.) I would like to see the other six episodes of “The White… Read more »

I lov e this series and was considering renewing my sub to Starz just so I could see this. Please give it a chance and don’t cancel this interesting program.

I have really enjoyed the three episodes that have been aired. So far the show seems to be following history closely. It would be a shame for this to end so abruptly. The Tudors was on for several seasons and I believe this show is better.

I am in the US and I love the show and would love to see a second seaon! my husband feels the same way too.

This is a great show from start to end. If you watch it all you will see why it can’t be renewed. Well done to all involved.

I think it should be renewed me and my mom and my sisters all love this show and id hate to see it go. it reminds me of game of thrones which is also another one of our favorites.

My husband and I love this new show. Please don’t cancel the series.