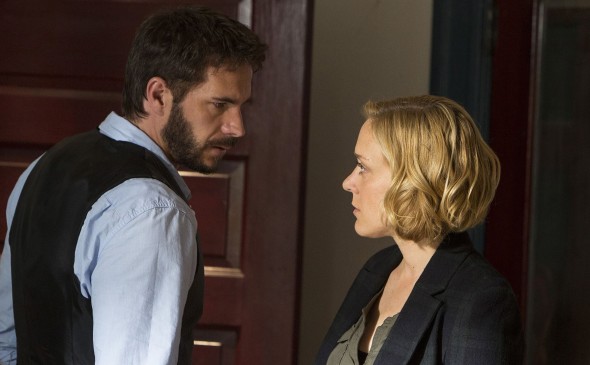 At the recent Television Critics Association press tour, The Hollywood Reporter asked several network executives the same questions. One question was “What was the hardest conversation you’ve had to have in the past year?”

David McKillop, the Executive Vice President and General Manager of A&E Network, responded, “I had to cancel a scripted show [Those Who Kill] that we all believed in. That was the hardest conversation I’ve had to this day because I didn’t understand why it didn’t connect with audiences. That made that conversation that much more difficult.”

The series drew terrible ratings on A&E and was pulled from the cable channel after two episodes. The dramatic thriller was later relaunched on Lifetime Movie Network (LMN). Though the series earned some devoted fans, the ratings got even worse. The finale aired on May 18th and drew just 480,000 viewers.

What do you think? Did you enjoy this series? Why didn’t it catch on? Was it a bad show?

I love this show!!! I am sooooo Mad! Why would they cancel this show!!!! Please put series back on!!!! Smh!!!! When u love a show they remove it!!! They needed to advertise more about the show so more ppl know about it!!!

The show gave me nightmares. The opening, with the moth caught in the spider’s web, freaked me out, and I found the characters totally unsympathetic. At least I can care about a couple of the characters on “Bates Motel.” Glad it’s gone.

I LOVED THIS SHOW. I COULDNT WAIT FOR EACH WHEN IT AIRED. I THOUGH IT WAS A GREAT SHOW. I LOVED ALL THE TWISTED STORIES. I WISH WE COULD HAVE FOUND OUT WHAT THE JUDGE REALLY DID. I MISS THIS SHOW

I am so disappointed that this show was cancelled. It was original, exciting and had characters with real depth. Yes it covered darker storyline’s which some viewers may have been uncomfortable with, but to me that’s what made it stand out.
I usually hate cop dramas as they are a dime a dozen but this one was one of a kind. I will definitely be looking to purchase it on DVD or blue ray.

We loved the show! It got better as it went on! Each episode was more exciting. I never saw it advertised and didn’t see any of the stars on any talk shows to publicize it! I think they could of gave it a second season and advertise it and get the stars out there pushing it! Everyone is my family is upset, we are going to miss it and we didn’t get any closure. This is why I hate to start watching new shows!

My sister and I LOVED LOVED LOVED this show. We couldn’t wait for the next episode. every week. Was shocked when we heard it was cancelled. Left us hanging with no closure on the plot. Sad day. Im know its a show that doesn’t do well in original air ratings but picks up viewers and because a cult hit. Great cast, good acting, clever writing, extremely well done. But then so many shows get canned that should stay on the air and idiocy in realty shows and blood and guts and vampires always stay on the air. We want to… Read more »

I DON’T THINK ENOUGH ADVERTIZING WENT INTO NOTIFYING VIEWERS OF WHERE TO FIND SEASON 2. I KEPT SEARCHING ON MY DVR TO NO AVAIL. I NEVER SAW IT ON LMN AND I CAN’T BELIEVE IT WAS CANCELLED..SO MANY OTHER SHOWS ARE ADVERTIZED ON OTHER STATIONS TO GET THE WORD OUT. THIS ONE WAS NOT AND I WATCH TV ALL DAY AND NIGHT LONG. CAN’T BELIEVE YOU
CANCELLED THIS ONE. WHAT A SHAME…

This was a very good show. Well written and well acted, I was extremely disappointed when it was cancelled. When networks cancel good shows without really giving viewers a chance to watch them for more than a few episodes, it shows that someone has their head up their arse….and it isn’t the viewers.

Me & my husband enjoyed it a lot. It’s seems all of our favorites get cancelled after one season. I LOVED Chloe Sevigny in Big Love and thought she portrayed a good detective.

He had a very good show with The Glades and plenty of loyal viewers & he wnt and cancelled it, the ratings are showing that the viewers were angry and didn’t care about the other,newer scripted shows. He just might need to start re-thinking things because there are a lot of us that are still boycotting them.

Then he has no need to put himself through that again. I hope he realizes he has a hit unique quality scripted drama in Longmire and renews it now for season 4. What the A&E execs have come up lately for new shows on their network is pure trash. They have been ratings bombs. People are sick of fake reality shows and promoting people with no talent about things no cares about, example Lone Star Lady, doesn’t she have enough money already you think we want to watch her flaunt it? That is why their shows are failing.

They blew it on the first show. Before you can have a serial put the chasers in peril you have to let the audience care for them. Let them have the first couple of arrests coming only with them saving citizens who are in danger. Not only was that a turn off having the duo not be completely having the others back was another mistake. The home picture at the end was just not enough to forgive the first 50 minutes. I was excited when I first heard of this production and even though I gave it another look it… Read more »

I never even heard of it. I TOTALLY would have watched it!

Same here and don’t know how I missed this one. There are only so many shows you can record and watch.