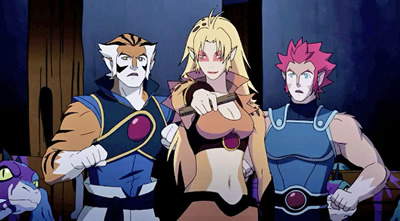 Animation – Excellent. Much clear, smoother than original 80’s version Story – Now here is where I have split thoughts, although interesting to focus on the Royal Cat Family, the origin story seems a complete deviation to the origin story from the 80’s cartoon. Thundera is supposed to collapse as a planet. Thundercats are supposed to flee and find 3rd Earth which was our Earth in another dimension, or in our dimension past/future (this was the whole thing that set our imaginations on fire as kids, if felt so close to home). It just doesn’t feel right, maybe this is… Read more »

Darn right i will watch it. I want to kow if they will do a good job to a series that entertained me when i was young. whats next Silver hawks , G-force a new Voltron lol. any way i will watch it because i remember the fun times of watching it from before. Snarf.

Where is He?? Where Is SNARF?!?! Forget this if it doesnt have Snarf in it.
*snarf snarf*

What I don’t get is why an advanced civilization is fighting with bow & arrow and catapults. The original had spaceships, hoverboards, thundertank, speeders, cats lair. I don’t see any of that in the trailer, how will they get to Third Earth. Seems like a pretty big departure.

Nothing will beat Filmation’s animation, unfortunately. Glad they’re doing this but not really a fan of how the animation looks, or at least the main characters (especially Lion-O).

Where the biscuits on middle earth is Panthro!!!! Come on ! That isn’t right. Ok.. I won’t loose any sleep if snarf isn’t in the new series.. LOL

damn that is a sad sad remake.

It’s interesting to see the variety of reactions here, including my own previous post, lol. It looks different, to be sure, but different isn’t necessarily bad. I mean, I used to think different meant bad, but the animation’s sharp, so I don’t really mind here.

i agree Kat. The new look very well done. I think Cheetaras new look make more adult and very fierce. in today’s society men have learn that woman are not to be underestimated they are strong and smart. I see that more in this version of her then the stay at the layer and watch over things kind of cat Meow. sure she did get out from time to time in the old series i just hope there is more to her in this series.

Definitely will watch. This looks awesome. Looks better than the original.

Looks like it’s got potential. Looking forward to it!!!

I could barely sit through the whole trailer. I’m a ThunderCats fan, and this looks awful. I will not be watching it.

It’s been a long, long time since I was excited about a cartoon (aside from Archer, but that’s so adult that it hardly counts), but after watching this, I have to admit, I’m definitely going to check this series out.

I wasn’t sure about it, especially the Cheetara redesign, but I’m sold thanks to the trailer. Now to see if it’s as good as it looks. And hey, this is from the same people who did Avatar, right? Long live American anime!