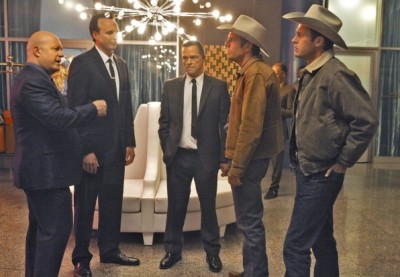 TV show description:
This TV series is based on the true story of former Las Vegas Sheriff Ralph Lamb (Dennis Quaid), a fourth-generation rancher tasked with bringing order to Las Vegas in the 1960s. It’s a gambling and entertainment mecca that’s emerging from the tumbleweeds.

Ralph Lamb wants to be left in peace to run his ranch, but Las Vegas is now swelling with outsiders and corruption which are intruding on his simple life. Recalling Lamb’s command as a military police officer during World War II, the Mayor appeals to his sense of duty to look into a murder of a casino worker.

This begins Lamb’s clash with Vincent Savino (Michael Chiklis), a ruthless Chicago gangster who’s moved West and plans to make Vegas his own. (The character is based on real-life crime boss Marcello Giuseppe Caifano.)

Lamb has two deputies who help him keep law and order. His diplomatic and even-keeled brother is Deputy Jack Lamb (Jason O’Mara). Deputy Dixon Lamb (Taylor Handley) is his charming but impulsive son.

The ambitious Assistant District Attorney, Katherine O’Connell (Carrie-Anne Moss), grew up on the ranch next to the Lambs and also lends a hand in preserving justice.

Series Finale:
Episode #21 — Sons of Nevada
After Porter Gainsley’s bombing of the Tumbleweed and attempt on Katherine’s life, Lamb and Savino decide to team up to take out their common adversary once and for all. To prove his commitment to the task, Lamb hands over the tapes with the recordings from the bug in Savino’s phone, and then the mobster and former sheriff get to planning their assault on Gainsley.

Since the ranching mogul is too heavily protected at his home, they decide to target him at a livestock auction, but that plan goes awry when Dixon shows up and holds Gainsley at gunpoint. A firefight breaks out and Lamb is forced to save his son and flee, giving Gainsley time to regroup and amass more artillery for the coming war.

When Jack is ousted as interim Sheriff by more of Gainsley’s men, he and Dixon join forces with Lamb and Savino, and together they craft a plan that involves using Jones the hitman to put Gainsley in a corner. Jones plays his part well and leads Gainsley and his thugs into a trap, where Lamb gives him his freedom as a reward.

After an intense firefight, Lamb gets the drop on Gainsley and decides to arrest him instead of killing him, setting the proper example for his son and staying true to his morals.

In the end, Lamb gets his Sheriff job back, putting him at odds with Savino and his plans for growth in Vegas yet again.

Meanwhile, Jack plans to propose to Mia, but his plans are derailed when she breaks up with him after finding out about the bug he planted in Savino’s phone.

Tommy pursues Mia even harder, and the two wind up spending the night together. After Gainsley is taken into custody, Jack goes to Mia’s place to fight for her, but is crushed when he discovers Tommy there with her — in nothing but a bath robe.
First aired: May 10, 2013

What do you think? Do you like the Vegas TV series? Do you think it should have been cancelled or renewed for a second season?

I cant believe it was cancelled!!!!
bring it back
this is a great series

We looked forward to this show every week. Was totally shocked when it was cancelled.
Don’t know what it takes to keep an excellent show on. Sick and tired of all the comedy, dumb, boring, non entertaining stuff you have to skip thru to try and find something worthwhile to watch. Cannot believe their ratings were so low that they deserved to be cancelled. YOU WOULD HELP YOUR NETWORK IF YOU BROUGHT THEM BACK ASAP.

I would love 2 C Vegas show COME BACK!! I couldnt wait 4 the show 2 come on….PLEASE PUT VEGAS BACK ON TV!!

The show needs to come back! Put in some Binion Horseshoe too. What network picked it up?

I looked on every site I could think of, there has been no pick-up of Vegas by any other station. Don’t know where he saw that. I wish it would be picked up. I still miss this show terribly and all the other so called “reality” shows and most of the “comedy” shows, which are so horrible should be off the air. It’s really an insult to the folks that really want Vegas back, that they won’t bring it back for US, the public who watches.

Please bring this show back!!!! Great actors in excellent roles. Cancel all those stupid comedy shows if want to cancel something

Yes, you’re so right – at least give us the option of viewing a GOOD show.

Can not believe Vegas was canceled! We loved this show! We are sick and tired of all the reality shows and was looking forward to a lot more seasons of Vegas.

You are right on !! These so called “reality shows” are nothing more than low-budget,
time-wasting, money makers for the television corporate big shots. They’re nothing more than watching some total stranger’s home movies of “What We Did Last Summer” !!
PLEASE BRING BACK “VEGAS” !! Or are we the “Lost Voice Viewers” with NO say ??

we never understood the show being canceled….but shocked it was renewed by another network.

I cannot believe CBS cancelled this program . HAVE YOU LOST YOUR MINDS ONE OF THE BEST SHOWS IN A LONG WHILE, BRING IT BACK PLEASE

WE’VE BEEN SAYING THIS FOR MONTHS NOW – WE WOULD LOVE TO SEE THIS SHOW RETURN SO WE CAN WATCH SOMETHING WORTHWHILE! THANKS FOR WRITING

I totally agree with you T.J Dallas is a great show one my favorites on tv. and vegas was too a great show too. These reality shows are a joke.

With so many people wanting Vegas back – please bring it back. Can’t and won’t watch any “reality” show. They’re a joke on society. This show was written by thinkers, and had so much potential for so many twists and turns.
There are so few shows for people to watch who want to be entertained by good actors and good writing.

Just when I find a show worth watching it gets canceled. What is wrong with these networks? Need to give this show another chance because the actors finally started meshing and working great together.

I totally agree with you, Jorja. The TNT network is running the show “DALLAS”
for it’s 2nd season and this show can keep us captive for a solid hour !!
“VEGAS” should be picked up by another network and it would “clean up” in the ratings department !! The garbage that these “reality” shows produce is BAD for OUR HEALTH!!

No question it should have been renewed for a second season.

Love the series it was fun and interesting becasue of the time period. Networks need to realize not everyone is represented in the Nielsen ratings! I don’t understand why these shows just don’t go to antoher network.

That’s a good question Liz – you would think that another network would pick up this great show that so many people really liked watching because of the wonderful writers and actors. I don’t find Nielsen very effective.

I really enjoyed the show but when they moved it in my TV area to Friday night it competed head to head with my favorite series Grimm. I would love to see them repeat the first season in re-runs and then do a second season, but don’t compete with Grimm

My hubby and I really liked the series. Seeing OLD Vegas and all the classic clothes and such, added to the fun of the characters. Of Course the actors and actresses were great and we will miss the show lots.

Maybe this will be one that is called back because folks like us loved and watched it.

“Vegas” was the finest shows on tv. in years. Now, “Dallas” is making a return performance
with only a handful of the original cast, mainly because the “oldies” are gone.
“Vegas” is young !! The actors are young !! There’s NO REASON why they can’t put it back on tv, either on TNT or one of the cable channels and get rid of some of the scrap
they keep renewing year after year. It’s all so worthless. “Vegas” you could watch with your family and not be embarrassed by the usual filth that goes with today’s tv. shows.

I really enjoyed that show. I wish they would bring it back.