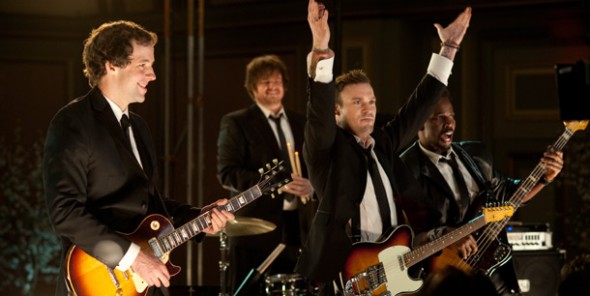 TBS has cancelled Wedding Band after one season. The sitcom ran for 10 episodes on Saturday nights and completed its run this past Saturday at 10pm.

The show debuted on November 10th to 1.85 million viewers with a 0.8 rating in the 18-49 demographic. The ratings for subsequent installments were quite a bit lower and fell as low as 937,000 viewers.

While Wedding Band won’t be back for a second season, TBS still has several original sitcoms — Sullivan and Son, Men at Work, and Cougar Town. All of those essentially draw about twice as many viewers as Wedding Band did.

What do you think? Did you like Wedding Band? Are you sorry that it’s been cancelled and won’t be back for a second season?

I liked this show a lot why they put it on a saturday night at 10pm i have no idea, was wishing for a second season.

I am disappointed. I enjoyed watching the show. There was nice rapport between all the cast members. Surprised more people did not watch the show. Maybe it should have been tried on a different night. I DVR’d most episodes to watch later in the week. How many people were doing that????

That show was awesome!! Another reason to not watch TBS anymore. Maybe NETFLIX will bring it back!!

Well that sucks!!! That was a great show!!! Damn TBS you guys make some odd choices.. Maybe put in on during the week (ie a Wednesday night) bad choice guys..

BOOOOO TBS!!!!! It was a really good show. I hope another network picks it up..

I loved wedding band so much that show was so great please bring it back for a second season I watched it every week I am so disappointed that you cancelled it…..z

Bad choice TBS!!!! We really liked this show. You should reconsider and bring it back.

Bring this show back, PLEASE! It was nice to have some “new” humor and not that “recycled” humor you get with these filler shows. Really am bummed that they didn’t even finish the season. C’mawn man-this show ROCKED! 😉

Really liked this show. Much funnier than Men at Work and Sullivan and Son. Definitely deserves another season.

loved the show, smart and funny, with great music, please bring it back!!!!

Why this show was awesome… TBS you suck… if you don’t bring it back..

Love Wedding Band because the music was awesome, please bring this show back.

I am so sad that TBS cancelled Wedding Band! I LOVED THAT SHOW!!!! I got so many of my friends hooked on that show! PLEASE BRING IT BACK!!!!!!!!