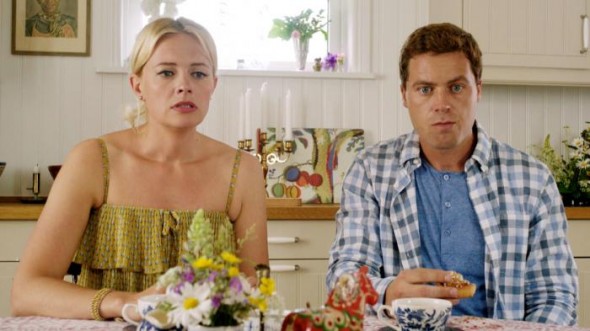 Holy shit. What a ride! Due to some craptastically low ratings in the US, WTS is officially done. I am eternally grateful to all of our fans. When you make a show – and write, produce, obsess and and act in it – all you want us for someone, somewhere, to tell you they appreciate it. There have been so many of you in both Sweden and the US that have done so, and every compliment has made me immeasurably happy. So, thank you. Thank you, thank you, thank you!!!! I'm sitting here crying, but mostly because I'll prob never work with Josephine, Christopher, Lena, Per and Claes again. They are among the best people I've ever met and I am so so happy and grateful that they let me act with them. Regardless, what an incredible journey! I could write for days about it. But I am so grateful to the cast, crew and directors for making Swedish tv history. I love you all! Among our accomplishments (aka "Things you would never read in a Swedish newspaper"): — 6 million viewers per ep worldwide (most by a Swedish show… last year? any year? ever??) — First ever Swedish show shown (as is) on American TV (subtitles and all) (I think first ever EUROPEAN show on any of the major US broadcast networks) — Winner Best Comedy (world) at BANFF; Winner Best Intl Comedy (Monte Carlo) — both firsts for a Swedish show — First nominations for Swedes at Monte Carlo Intl TV Festival – Bornebusch (Best Actress) and me, if I count as a Swede (Best Actor) –Countless memories that will last a lifetime THANK YOU SO MUCH EVERYONE! I sincerely love you all. Tears of joy…. The best thing is we live in an age where you can see the remainder of the eps on NBC and Hulu and Amazon and elsewhere (Paul Simon and Jack Black and Neve Campbell and Aubrey Plaza await). So please PLEASE watch them. I think they are great. Toward the end, I finally figured out what I was doing. Worry not. The best is yet to come. For me and for you.

I just discovered Welcome to Sweden! I love it. So disappointed there are only two seasons! I would love to see more episodes!

It was uneven, but very, very funny at its best. Edgy and lovable at the same time? It would have ripened, like so many ultimately hit shows that started slowly. the characters made up for some of the slow spots. Too bad! So much better that a lot of the really awful, insulting, dumbed-down things that do survie.

Such a funny show! I hope another channel will pick it up. Sad!! Bring it back and give it a chance!!!

My son and I watch Welcome to Sweden and were disappointed to see it had been canceled. Wish NBC would have made it easier to watch, but we would have definitely watched Seaspn 3. Maybe someone else will pick it up..

Absolutely loved the show, very sad to see It go. I did watch the remaining episodes and would have definitely tuned in for a season 3. Many years ago I spent some time living Abroad in Denmark and Sweden and I can Say from experience that the show nailed It, brought back many funny experiences and memories 🙂 Unfortunately in my opinion the typical american is not well traveled or experienced In things abroad and therefore the shows Target audience was probably a very small One. The show was excellent and very well crafted Regardless of what ratings say, thank… Read more »

Loved the show, even though the network made it hard to find. Absolutely nuts for the network not to run Season 2 on a well promoted consistent night. And now some episodes are viewable for free on NBC, but some others are not — let us see all of them !!! It’s great to get a taste of the cultural differences between two countries, and because of the American and Swedish cast, the audience could be confident that we were seeing authentic — and very funny — culture clashes. Thank you to all the production crew and the cast members.… Read more »

My sons and I really enjoyed Welcome To Sweden. It had a fun premise and enjoyable professional actors. NBC is making a mistake canceling the show, the time slot was bad and there was virtually no promotion of it. Shall I remind the NBC execs of the almost cancelation of Seinfeld… Now how would that have turned out?

My wife and I LOVE Welcome to Sweden!! We did watch all the unaided episodes from Season 2 and would’ve gladly come back for Season 3 and beyond! Greg and Co., thanks for a GREAT show! We’re sorry to see it go! And now you know.

Any time a show that is canceled. It amazes me how many people love it, and think that everything else besides it is crap. lol

Oops! Any time a show is canceled, it amazes me how many people love it, and think that everything else besides it is crap. lol

I am moving to Sweden with my entire family this year. We so enjoyed this show and are sad it is cancelled. I never watch sitcoms and this was so refreshingly fun and real. A great cast of truly talented folks! This show did not deserve to get the axe.

I am moving to Sweden withy entire family this year. We so enjoyed this show and are sad it is cancelled. I never watch sitcoms and this was so refreshingly fun and real. A great cast of truly talented folks! This show did not deserve to get the axe.