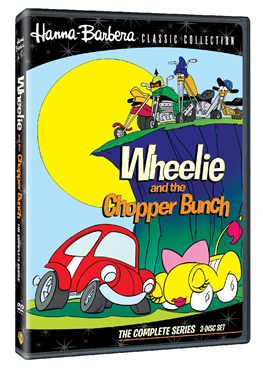 Debuting in 1974 on NBC, Wheelie and the Chopper Bunch aired for just one season of 13 episodes. Though the animated series didn’t last very long, its well-remembered by those who were watching Saturday morning television at that time.

The series revolves around Wheelie (Frank Welker), a red Volkswagen Beetle, and his girlfriend Rota Ree (Judy Strangis). Wheelie’s a professional racing and stunt car and the rotten Chopper Bunch are always trying to make sure that he doesn’t win his races. The members of the bunch are tough Chopper (Frank Welker), a sputtering three-wheeled motorcycle named Revs (Paul Winchell), tall and dumb Hi-Riser (Lennie Weinrib), and minibike Scrambles (Don Messick).

for $24.95 or you can also try to win a copy here. To enter, you need to merely post a comment below.You can enter once per day.

UPDATE: Congratulations to Liz who won this DVD set in our contest. Thanks to everyone who played and we’ve got more contests coming!

i remember this cartoon as a kid it was one of my favorites. i love the hanna barbera cartoons these are better then todays cartoons

this would be oerfect for my cousin its his fav!!!

I use to LOVE this show when I was a kid. I remember trying to describe it to some friends last year who are close to my age and they couldn’t remember it. Unbelievable!

Oh good lord I thought I was the only one who remembered this cartoon..I always remember the end of a typical episode–the mini bike always saying ” I told ya! I told ya!” while the head chopper goes “Shaddup!” (repeated to the point to where Mom would turn the TV off because it drove her nuts)

Wow! Great memories! Nothing like the good old days of talking vehicles.

I LOVE Wheelie and the Chopper Bunch. No one ever remembers it. They think I’m insane when I tell them about it. One of my all time favorites. Pick me! Pick me!

I Would love too win this i have most of the hanna barbra dvd’s love the old cartoons!!!

I hope to win this DVD!

Please enter me in the drawing. : )

I remember this show! This would be awesome to win!

My son would absolutely love this. He is an old cartoon freak.