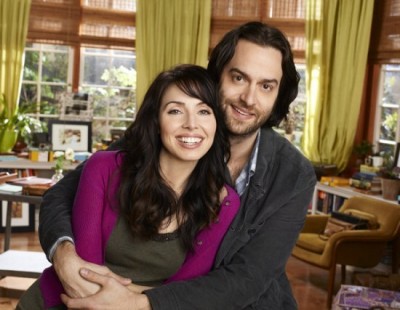 TV show description:
This multi-camera revolves around Whitney (Whitney Cummings) and Alex (Chris D’Elia), a happily unmarried couple. She’s a smart, free-thinking photographer and the product of a divorced home. He’s an easygoing, smart guy who sold his Internet company. They’ve been together for three years but the pair are in no rush to tie the knot, a set-up that gets a mixed response from their friends.

Lily (Zoe Lister-Jones) is a romantic idealist who loves being in love and unapologetically wants to get married to her “perfect man,” Neal (Maulik Pancholy). He’s a real modern day Renaissance man — a sensitive and cool guy who knows a little bit about everything.

Roxanne (Rhea Seehorn) is a recent divorcee who is practical, cynical and dreading being single again. She’s not afraid to speak her mind, but has not given up on love completely. Lily and Roxanne’s opposing points of view only exacerbate Whitney’s own complicated outlook on relationships.

Whitney and Alex’s next-door neighbor, Mark (Dan O’Brien), is a police officer and total bachelor. He claims to be the ultimate player, but mostly likes to talk a good game.

At the end of the day, Whitney and Alex try to have a relationship on their own terms — in a world that expects a much more traditional approach.

Series Finale:
Episode #38 — Cake, Cake, Cake
During a casual stroll in the park, Alex and Whitney stumble upon Whitney’s therapist eating a full cake by herself. At the bar, Mark notices that RJ is in a great mood, and the gang soon discovers that RJ is dating someone who he really seems to like. RJ refuses to reveal the identity of his new girlfriend, but his offer to hook Mark up on a blind date makes Roxanne jealous.

The next day, Whitney meets with her therapist, Dr. Price, and admits that she saw her in the park eating cake. Dr. Price immediately becomes defensive and quits on the spot. Back at the bar, Mark brings his date to meet the gang. Roxanne’s jealousy makes her bitter and rude to Mark’s date, and Lily advises her to be nice.

Meanwhile, Whitney complains about her weird therapist and Alex assures her that she doesn’t really have any problems anymore. Alex says that, from now on, he’ll act as Whitney’s therapist. Eventually, he convinces Whitney that she’s actually happy now. Whitney decides to invite Dr. Price over to make friends and eat cake, and Whitney and Alex realize that they’re incredibly happy.

Mark finally talks to Roxanne about her behavior in the bar. He tells Roxanne that he’s only going on dates because Roxanne won’t go out with him, and he’s tired of wasting time waiting for her. The next day, Roxanne finds Mark in the park and confesses that she’s afraid to be in a healthy relationship. Mark and Roxanne finally share a kiss, and she can’t contain her excitement.
First aired: March 27, 2013

What do you think? Do you like the Whitney TV series? Are you sorry that it’s been cancelled?

WHY drop a great show, and keep badones

I loved this show. I am super upset that it is cancelled, I think it was a mistake. BRING IT BACK!!!!

I loved this show. I am super upset that it is cancelled I had no idea and I think it was a mistake.

It was a very good show. Very disappointed in it being cancelled…. 🙁

Everything on tv that is funny, and isn’t some stupid reality show, is canceled. This was a great show and I was loyal to it.

Why are they taking such a wonderful show off. Everyone enjoys this and love all the actors. Please keep it going.

so upset they cancel these amazing great comedies. I’ve been a loyal watcher every week. Very disappointing.

So sad this was a great show. Booooo ABC

Whitney was a very well written comedy, what a shame the decision makers didn’t see it that way. Seems the great shows get cancelled .

This was one show I absoulutely loved! It seems that when you finally find a show, it isn’t long before they either move it or cancel it. BRING IT BACK!!

This was a hilarious show!! Please bring it back. I’m so mad that these shows don’t really seem to be getting much of a chance before they are canceled!!’

ALL Networks Suck anymore, it’s not like the 70’s or 80’s where they actually let things grow and become a great show. If some of those shows from back then came out today I bet most would not see a season 2. It sucks because all these TV Executives have such a SHORT attention span nothing good last and all we’re left with is REALITY CRAP, Like Who’s the best baker or whatever stupid real world reality BS they want to force down our throats… I Hope SOME OTHER Network is smart enough to Pick up WHITNEY ( it was… Read more »