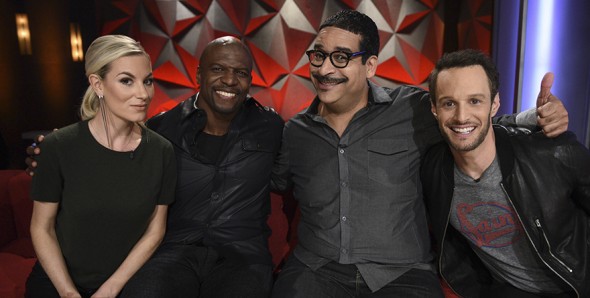 FOX hasn’t renewed World’s Funniest Fails for a second season but they have ordered eight more installments for the first season. Four episodes have aired so far, averaging a 1.0 rating in the 18-49 demographic with 3.04 million viewers.

FOX has ordered an additional eight episodes of the irreverent unscripted comedy series WORLD’S FUNNIEST FAILS. Hosted by Terry Crews (Brooklyn Nine-Nine), the series is inspired by the hit YouTube channel, FailArmy, and showcases the best “epic fail” viral videos in the most entertaining ways possible. Each week a panel of comedians choose their favorite “fail” videos and try to convince Crews to pick theirs as “Fail of the Week.” But, ultimately, it is Crews who crowns the winner.

Owned and operated by Jukin Media, the worldwide leader in the discovery, acquisition and distribution of user-generated and viral video content, FailArmy is the premier destination for the funniest videos on the web. FailArmy is a Top 100 YouTube channel with more than six million subscribers and one billion total video views.

What do you think? Do you like this Friday night series? Do you think that FOX should have ordered additional episodes?

I fail to find this show funny.